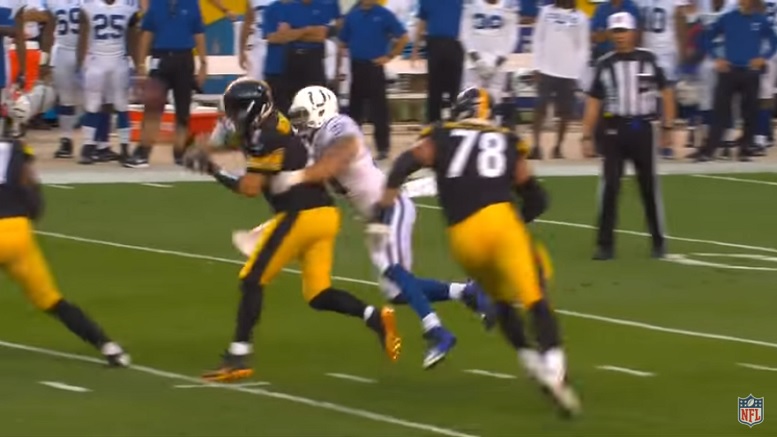 As long as things go well during this week’s practices, Pittsburgh Steelers quarterback Ben Roethlisberger is expected to make his 2018 preseason debut in the team’s annual tune up game Saturday at Heinz Field against the Tennessee Titans. While Roethlisberger said Tuesday during his session with that media that he expects to play Saturday against the Titans, he still doesn’t know how much that will ultimately be.

“I am not really sure,” Roethlisberger said Tuesday when asked if knows yet how long he’ll play against the Titans. “I haven’t spoken to Coach [Mike Tomlin] on it. I am excited to get out there. I am sure there will be some jitters and rust. It will be good to get out there with the guys.”

Ben Roethlisberger spoke to the media about our third preseason game and ‘knocking the rust off’. pic.twitter.com/Dgi0rswhT7

In all likelihood, Roethlisberger won’t play the entire first half against the Titans. In fact, in last year’s third preseason game against the Indianapolis Colts he only played 16 offensive snaps that counted on his way to completing 6 of his 9 total pass attempts for 73 yards. Backup quarterback Landry Jones took over for Roethlisberger after two offensive series and at the start of the second quarter.

In the Steelers third preseason game of 2016 against the New Orleans Saints, Roethlisberger also only played the first two offensive series that included a 15 play, 74 yard touchdown drive to start the contest that culminated in a 5-yard scoring toss to tight end Jesse James. Roethlisberger’s second and final offensive series of that game lasted all of 4 plays and covered 79 yards. It culminated in a scoring pass from Roethlisberger as well, a long 57-yard catch and run by wide receiver Antonio Brown.

On Tuesday, Roethlisberger was asked if he’d like to potentially see a repeat of the offense’s performance against the Saints a few years ago Saturday at Heinz Field against the Titans.

“Yeah, obviously that would be ideal,” Roethlisberger said. “Just to get out there. I think usually the amount of plays determines how we do series-wise. Are you going three-and-out? Are you sustaining drives? Things like that. So, obviously this is the first time we all will be together on the field at the same time, so it would be nice to put together a couple drives and then find a way to finish them off and stay healthy.”

While Roethlisberger obviously isn’t hoping to take any hits Saturday against the Titans now that he’s several days removed from being placed in and quickly removed from concussion protocol as a result of him taking a hit from tackle Marcus Gilbert a week ago today during the team’s final training camp practice of 2018, he knows he has to walk the line Saturday between shaking off any potential real game rust he might currently have and putting himself in a situation where he could potentially get injured.

“For sure. I think hopefully the hardest hit I take all year is from Gilbert,” Roethlisberger joked on Tuesday. “Then we can laugh about it at the end of the year.”

Speaking of Roethlisberger getting hit during a preseason game, last year in that tune up contest against the Colts he was sacked on his blind side by John Simon after he had won the edge. Simon knocked the football loose on the play and the Colts defense recovered it.

Steelers head coach Mike Tomlin will more than likely address what the Saturday plan for Roethlisberger and the other quarterbacks on the roster will be in regard to playing time and rotation during his Thursday press conference.