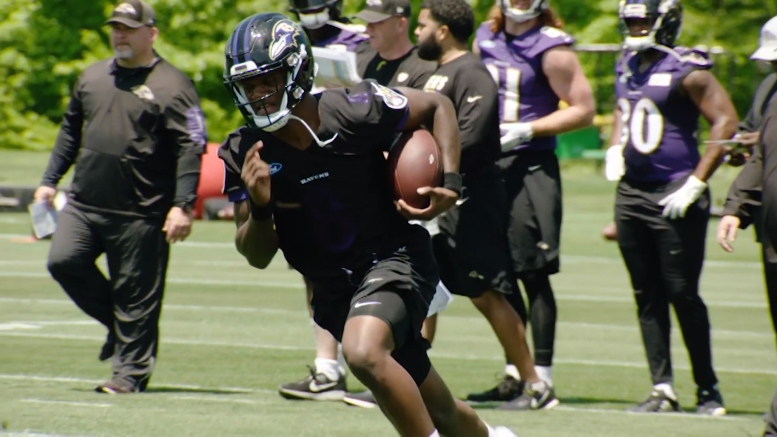 While it’s been assumed all along that it would take time for Lamar Jackson to fully develop as a quarterback, the Baltimore Ravens believe that he can be an immediate asset to their offense and intend to use both him and Joe Flacco on the field at the same time.

One of the reasons that this is possible is because of Jackson’s excellent running ability, which he has already been able to feature through the Ravens’ first two preseason games. Those efforts culminated in an impressive rushing touchdown on Thursday night that got his teammates and coaches excited.

“I thought he was tackled twice, and then he wasn’t”, Head Coach John Harbaugh recalled of the run. “You always appreciate that if he’s on your team. Flacco said that “he’s so good at cutting back on guys” and praised his ability to “stop on a dime”. Even Jackson himself felt it was an “excellent” play.

That said, he hasn’t exactly looked like somebody who is going to be under center for every snap of the season opener. He struggled as a passer in his preseason debut, and while he showed improvement in the Ravens’ second game, he still only completed seven of 18 pass attempts, albeit for 119 yards.

Through two games, Jackson has completed 11 of 28 pass attempts for 152 yards. He has thrown one touchdown pass and one interception. As a runner, he has carried the ball 13 times for 46 yards, which finally culminated in his nine-yard touchdown run against the Los Angeles Rams.

While the numbers have not been there yet, the Ravens do see the poise of a more seasoned player. That includes the way that he has handled himself both on and off the field. He improved with his ability to remain in the pocket. He has also been highly critical of his performances and has focused on making the plays next time that he left on the field.

Jackson will eventually be the future, but it may not come this year. Flacco is still a reasonable commodity at the quarterback position that can win the team some games, even if both sides seem to understand that that partnership is now living on borrowed time and will inevitably end in a year or two.

At some point, it will be the 2018 first-round pick’s chance to run the offense, and Baltimore hopes that they will have the time to develop him before throwing him out there. In the meantime, he has three more exhibition games to improve before the regular season gets underway.