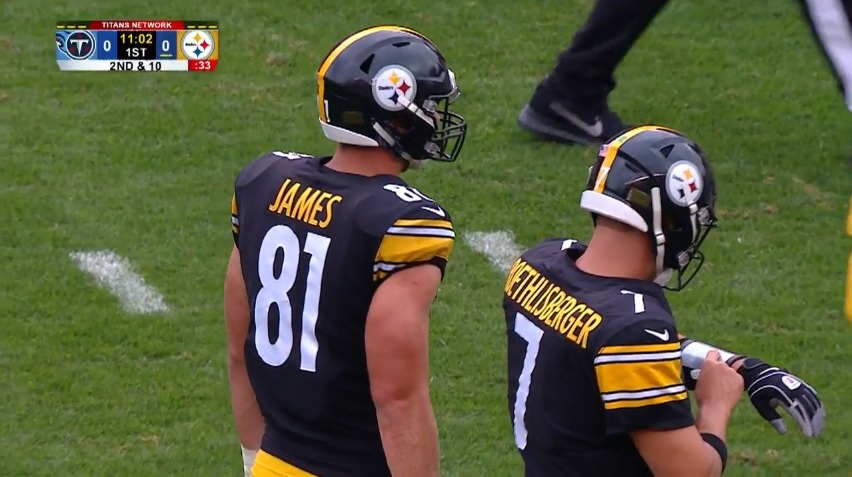 Attended my first Steelers game of the 2018 season; albeit the third preseason game. I had the pleasure of driving up to Heinz Field with Tim Rice; many of you have seen his excellent photography skills on display here on Steelers Depot.

We were so engrossed in conversation about the Black & Gold that we missed the fact that we were about out of gas. The gas gauge told us that we only had 24 miles left and to refuel as soon as possible. The problem was we were 26 miles from the nearest gas station up in Bedford. Of course, as we drove up the steep grade approaching the Allegheny Mountain Tunnel the gas mileage plummeting and as we entered the tunnel, the gauge said we had 0 miles left. We had over a mile of tunnel and then five more miles until reaching the gas station outside Somerset. I was a bit nervous, but Tim was nonplussed stating, “I had everything under control.” Imagine something so mundane as how much fuel is in the tank distracting us from our conversation about the Steelers.

In any case, we managed to fuel up and made it to Heinz Field with plenty of time to watch the Steelers pre-game practice. Mike Tomlin was very animated talking to individual players. Big Dan McCullers was not dressed for the game but stayed with the defensive linemen as they warmed-up. Something, I don’t recall him doing last year when he was not playing. Good to see him staying engaged.

Matthew Marczi listed What to Watch For in this 3rd preseason game. My observations are based on watching the game live and as I type have not had time to review the game on the recorder yet. So here are my impressions: Ben Roethlisberger’s passes floated high. The debut of Roethlisberger passes connecting with James Washington will have to wait as both times the ball was well out of reach of the rookie receiver. He’d have to be Manute Bol or Inspector Gadget to have had a chance to catch either pass that came in his general direction.

Both the first team offense and defense played much longer than I anticipated. Ben played well into the second quarter before being relived by Landry Jones. James Conner did expand his repertoire into the passing game as Marczi suggested prior to the game. Six receptions for over 50 yards. Not as successful running, he took some hard shots but played into the 3rd quarter. Unfortunately, we saw Marcus Tucker get his ankle hurt close to the sideline and was not seen on the field after that. Jaylen Samuels made some nice runs and staked a claim for a roster spot. Josh Dobbs was the quarterback left out of the mix. I bet he plays at least a half on Thursday.

On defense, we did not get to see T.J Watt play but the defense seemed to be wrapping their tackles. I’m sure there were some misses, but it appeared that the defense was making stops and limiting yards gained after catches. The run defense also stuffed Tennessee while the first unit was in. Sean Davis did get an extended look; but not with Morgan Burnett. Instead Terrell Edmunds played back with Davis. What a sweet interception. Terrell can motor. Marcus Allen got into the game and intercepted a desperation pass to close out the game. Glad he is healthy enough to play. Defensive line looked solid. Nice to see Cam Heyward, Stephon Tuitt and Vince Williams get sacks. There was some miscommunication on defense but seemed mostly with folks lower of the depth chart. A timeout was called, and Mike Tomlin had an extended chat with Tyler Matakevich. Joshua Frazier played but not sure he did anything to supplant Big Dan as the 6th lineman.

Nice to see Cameron Sutton fielding punts even if he fumbled the first one. I thought he was going to take it to the house. A couple of Chris Boswell’s kicks looked close but he ended up 3 for 3. Just teasing us. The kick coverage units looked much improved from the Packer game.

Justin Hunter frustrates a lot of folks, but his touchdown reception was sweet. Tim Rice caught a great snap of the moment despite an exuberant fan that jumped up just as Tim was snapping the photo. Give him a follow on twitter @TimotRice

I’m sure there is much more that is not captured here but this is my initial reaction as an average Steelers fan. Feeling much better about the club’s chances this season than I did last week. Hopefully, Jesse James, James Washington & Marcus Tucker are ready to play again soon.

I have not read through the Steelers Depot Live Update and Discussion Threads yet. But, did open the articles to see what the best comments were. In the first half thread, alevin16 was apparently satisfied with the defensive line, had seen enough and said , “OK take 91 and 97 out please” Spencer Krick noted, “Conner just can’t seem to break out on any of these plays. Great routes and hands though.” While Phil Brenneman II observed that, “Matthew Thomas continues to show up on tape every time he is in.”

In the second half thread, CP72 doubled down, “Matthew Thomas can start looking for an apartment. He’s made this team.” John Noh gave Mason Rudolph some kudos, “Mason moves smoothly inside the pocket. That was nicely done.” I agree, the young quarterback maintained his composure even under pressure and slipped away a few times.

I’ll read through both threads tomorrow once I get some rack time. Many thanks to Matthew Marczi for keeping us updated and running the thread.

Well, that’s all for now. In the 2018 Memorial Day Weekend: Steelers Friday Night Five Questions, I committed to play songs that Steelers Depot respondents had suggested might be the new Steelers anthem if Renegade by Styx was ever replaced. Here is entry thirteen of 45 from Spencer Krick & Matt Manzo: Seek and Destroy by Metallica.