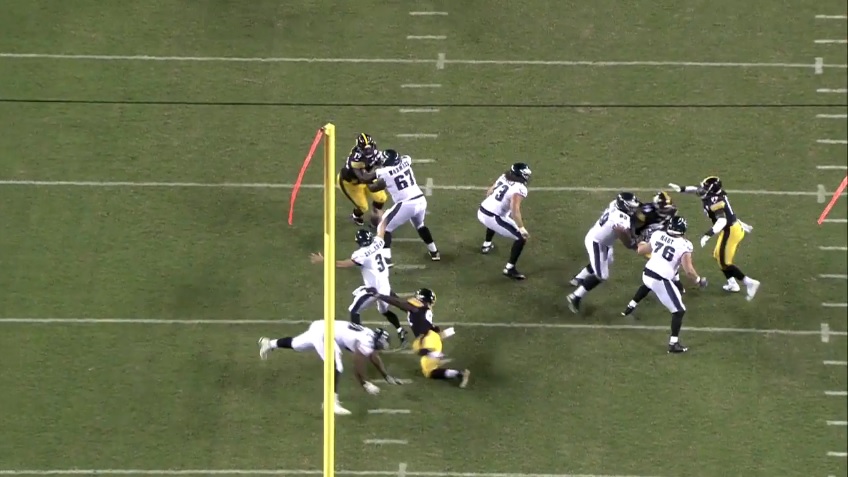 Rookie outside linebacker Ola Adeniyi has had an impressive training camp, earning some rare praise from Mike Tomlin. Maybe just as impressive is the fact he’s doing it with a bad wing.

Posting to Twitter, Adeniyi shared a photo of a cast on his right wrist.

Had some fans sign my cast today and FYI I will be selling this on eBay 😂😂 pic.twitter.com/jUUNzRgZRQ

He joked he’s looking to sell it on eBay. If he keeps playing the way he does, maybe it’ll soon be worth something.

It’s unclear the exact nature of the injury or when it happened. Adeniyi missed a couple days of practice earlier in camp, presumably when he suffered the wrist injury.

The injury makes more sense for why he’s played more on the right side as camp has gone on. Easier to have that outside arm, his injured right hand, free, than the inside hand, the one he needs to punch with.

Of course, having that case presents some problems. Mainly, as a tackler, having only one hand free and essentially, a club on the other.

Adeniyi is looking to latch onto the Steelers 53 man roster with that 5th OLB spot. Something that’s definitely possible after the strong first impression he gave the coaches Thursday against the Philadelphia Eagles, recording a sack and forced fumble early in the third quarter.

Should Bud Dupree and T.J. Watt continue to miss time and sit out the Week 2 contest against Green Bay, neither are back practicing, it means more opportunities for Adeniyi. He’ll have to earn his keep on special teams, too. As Dave Bryan talked about in last night’s podcast, only Xavier Grimble logged more ST snaps than he did Thursday.