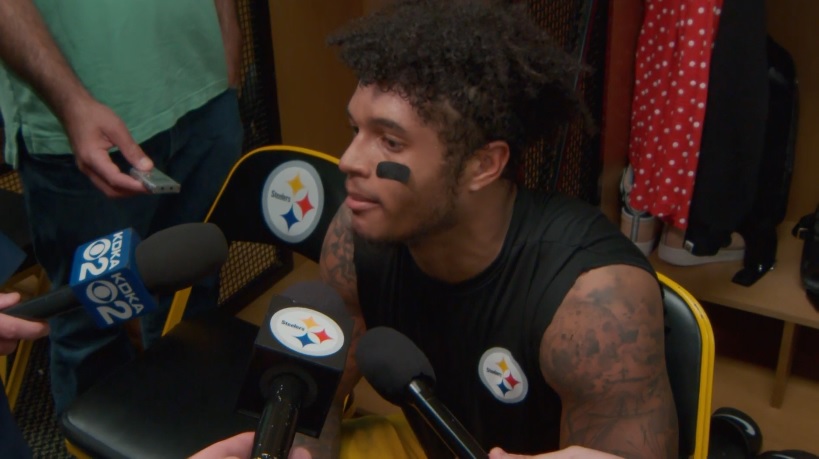 It’s been a difficult rookie year for safety Marcus Allen. Injured in the spring, missing all of OTAs, and then suffering another blow during camp, missing valuable practice time and the Week 2 matchup against the Green Bay Packers.

But when he was healthy, Allen knows he put out his best effort.

“It was a lot of adversity my way,” he told reporters following the win over Carolina. “I feel as though, these last game and a quarter, I gave everything I could. I gave it my all. When I play the game of football, I play with passion. As you can see on the field, that’s how I play every game. I can’t hold that back.”

Allen is certainly giving the Steelers a tough decision to wrestle with. Checking in late against the Tennessee Titans, he picked off the game’s final pass, high pointing the ball in a crowd and finishing the play. His work Thursday night against the Carolina Panthers was impressive. He finished the day with ten tackles, six solo, one behind Matthew Thomas for the team lead.

Is that enough to make the 53 man roster? Mike Tomlin presented it as long odds earlier this week but pointed to past examples of Ross Ventrone as players who have climbed that mountain. Of course, that was a veteran, not a rookie.

Making the roster means being carried as the 5th safety. That’s tough odds as it is. But he’s also competing with Jordan Dangerfield and Coty Sensabaugh as the final member of the secondary. Worst-case scenario, he’s cut, lands on the practice squad, and quickly gets called up whenever an injury strikes and a roster spot needed.

He’s a prime example of why the 4th preseason game matters. Yes, it’s comparatively boring. Yes, most of the players you just watched aren’t making the 53 and a good chunk, you’ll never hear from again. But it matters to all of them and especially to guys like Allen, trying to make one last case for why they deserve to be kept come Saturday’s cutdowns.