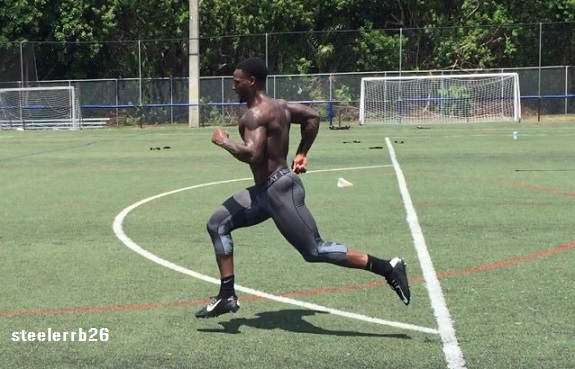 The Pittsburgh Steelers believe that training camp is essential for players to be the best they can possibly be. Le’Veon Bell believes that players who are not currently under contract are well-advised to stay away in order to help avoid injury. Given that the two sides failed to reach a long-term contract earlier this offseason, there is an issue inherent within it.

Of course they’ve already been through this last year. Will either side have learned from those experiences and be able to work toward limiting the negative effects of his absence this time around? One of the trainers that Bell works with, Rischad Whitfield, believes that he can help with that.

“I’ll do a lot of things that will help Le’Veon with his quickness, agility and coordination”, the “Footwork King” told Jeremy Fowler during an interview for an article on ESPN’s website. “I’ll be fine-tuning his football endurance as well as doing a lot of tempo runs.”

It took Bell and the offense several games last season before they really started to blend together. The Steelers even limited the prolific running back’s touches early on in the season, yet he still led the league in touches at the end of the year with over 400.

The team’s concern rests in their philosophy that the only way to get into football shape “and to prepare to play football”is to play football. Even though they expressed satisfaction in Bell’s performance last year, General Manager Kevin Colbert was vocal in his believe that the running back could have been even better.

Whitfield told Fowler that, as the journalist wrote, his workouts will account for Bell’s absence from came, but it’s worth noting that Bell also worked with him last year at around the same time, so one would hope that the trainer has a different regimen in mind for his client this time around.

Bell is not Whitfield’s only high-profile client, of course. He has also worked with the likes of DeAndre Hopkins and former Steelers wide receiver Emmanuel Sanders. It’s not as though he doesn’t have the credibility.

But for a position as physically demanding as the running back position, it’s hard to imagine that any amount of training outside of a football practice with a physical contact component could actually help him to better integrate into the season than he did a year ago.