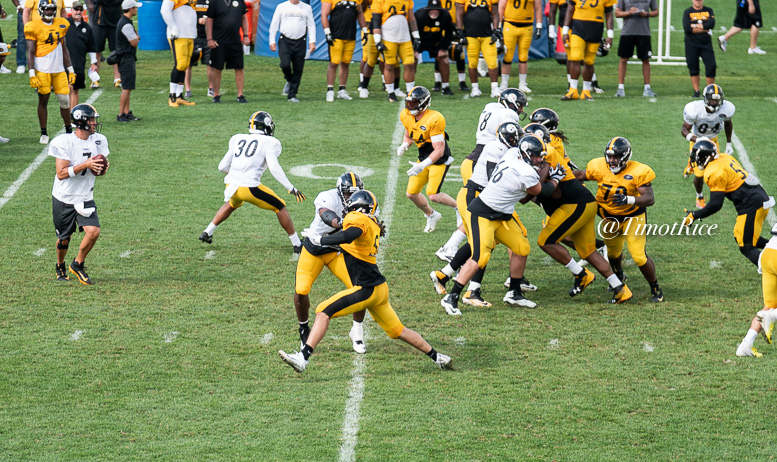 With the Pittsburgh Steelers first preseason game on the horizon, let’s reflect on the first 11 days of training camp. Because honestly, understandably, once we hit kickoff, most people don’t care about camp anymore. There’s a whole lot of game action to work through.

Understand these are just impressions from practice and plenty can – and will – change after Thursday and during the rest of the preseason. But the good, bad, and ugly from the start of the 2018 season.

– James Conner: Pick any player on this roster as the most impressive. Go ahead and ask anyone who has attended camp. Their answer is probably going to land on Conner. We knew he could run the football. Now, he’s showing off everything else. Square, confident, physical in pass protection. Smooth and comfortable as a receiver, making tough catches, grabbing the ball away from his body, and being someone you can depend on. He also looks leaner than last year too, a natural progression for most big backs who come through the Steelers way (Le’Veon Bell did the same thing).

– James Washington: Hard not to be impressed by this rookie class top to bottom. Lump Washington into that group. It wasn’t the most magical beginning for Washington the first couple days but his overall consistency has been remarkable for the WR position, a difficult spot for a rookie to transition to. A combative catcher, physical player, and a guy getting comfortable with lining up at different spots and splits/alignments. He’ll make some big plays in the preseason.

– Terrell Edmunds: Impossible to know what the future holds for Edmunds or any of these rookies. But so far, so good. A safety who covers like a corner, Edmunds has looked surprisingly strong – for any DB – in one on ones and in pockets, that’s translated over to team drills. Two interceptions in camp and a breakup in Monday’s practice. Haven’t seen a ton of tackling from him in drills, though there’s been a want-to, so something to keep an eye on when the lights come on.

– Vance McDonald (before getting hurt): Is it cool if I add that “healthy” qualifier? Sort of have to at this point. But if that foot is just being rested out of extreme caution, McDonald could have a big year. His athleticism, comfort in the system, ability to get vertical, and new OC Randy Fichtner working him in space. When #89 was out there, good things happened.

– Coty Sensabaugh: Certainly a surprise even as a vet. Quarterbacks have had a tough time completing passes his way. Two more balls hit the ground in Monday’s practice. He’s making as strong a case as he can to be kept as a 6th cornerback. Will be a good discussion if that should/would happen.

– Ola Adeniyi: Wearing James Harrison’s #92 and looks like a poor man’s version of him. Short, stout, with a great rip move and showing quickness off the ball. Will repeat myself and wonder aloud if the dude can cover on defense and on teams; he’s stocky and not the best in space, but as a pass rusher, he’s going to win some battles.

– L.J. Fort: Fort is the forgotten man in that ILB group. But he’s got sideline to sideline range, finds the football versus the run, and makes plays with a pair of forced fumbles and recoveries. Hope he makes the team. Don’t forget about #54.

– The 7 Shots Offense: I haven’t tallied up all the numbers yet but in red zone work, the defense has been the winner far more often than not. Obviously, you get one side winning, the other losing, but the vast majorities of these sessions have gone in favor of the defense. Something to monitor for an offense that has habitually struggled in the red area.

– James Summers: I do want to preface that not many players in camp are having a terrible time. But Summers has struggled and fallen into the last place spot on the RB depth chart, originally working ahead of Jarvion Franklin but now falling behind. He hasn’t done much as a runner outside of showing some occasional toughness and ability to push the pile forward because of his size. His pass protection has been dreadful, getting owned by Keion Adams during Friday Night Lights, and he isn’t going to give you very much as a receiver. A guy I can’t see making the practice squad and even finding carries in the preseason will be tough.

– The reserve TEs: Kind of all in the same boat. Ryan Malleck was bad and then injured. Pharoah McKever is a sub-par blocker while Christian Scotland-Williamson very much looks like a guy playing rugby a year ago. McKever and even Bucky Hodges have intrigue as a receiver but as a blocker…they won’t do their backs any favor these next four games. Heck, throw in Xavier Grimble, who will make the team and has vastly improved as a blocker over the last 12 months, but shrinks in the moment too often.

– Joseph Cheek: Hate to pick on a young, reserve linemen who could pancake me out of Latrobe. But Cheek doesn’t look like a tackle, struggling to seal the edge against quick pass rushers. Ola Adeniyi and Bud Dupree have taken him to school. Cheek has too many false starts too, including one during Monday’s practice, and that’s going to frustrate coaches. If it’s Cheek and R.J. Prince (who I like at guard, not so much at OT) at tackle at any point Thursday, whoever is in at QB is in for a long evening.

– The reserve DL: Similar situation to the tight ends. Kendal Vickers, Greg Gilmore, Parker Cothren. A collective “meh” from that group. To be fair, they don’t get many reps, and that’s difficult to showcase talent. But no one impressing in that reserve group. Even a veteran like Lavon Hooks hasn’t really popped. Still going to be some practice squad spots to fill and I wouldn’t be mad if they went outside the organization to solve that.

– Marcus Tucker: It isn’t bad bad and part of this is the ankle injury that cost him a couple of practices. But Tucker wasn’t lighting the world on fire before getting hurt (he did return in full Monday, that’s good news) but missed some valuable reps with the starters with all the injuries at WR. Instead of replacing JuJu Smith-Schuster in the slot, those reps went elsewhere. Hasn’t been the start to send him to the 53 man roster.