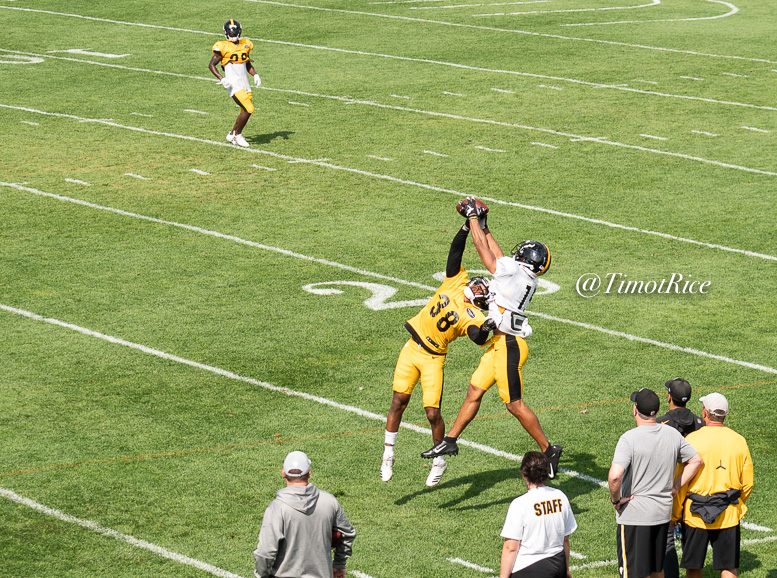 Now that we have some football at our backs, here’s my updated Pittsburgh Steelers 53 man roster prediction. Of course, much will change throughout the next three weeks, but this is my best guess after 11 training camp practices.

Analysis: No changes here since my prediction prior to camp. In face, I feel more confident that Josh Dobbs will be the odd man out. Can he be trade bait? A front office that had a 4th/5th round grade on him now able to acquire him for a 7th? A possibility for a team who loses a QB in this process.

Analysis: Sticking with four RBs, mostly because I have the luxury to do so. The team won’t keep fewer than 24 players on the offensive side of the ball. Ridley is worth more than an extra OL or WR, in large part because I simply think he’s more talented.

Analysis: Dropping down to just five receivers. Eli Rogers feels poised to begin the year on Reserve/PUP, removing him from the equation. Marcus Tucker, so far, hasn’t done enough to warrant a roster spot. Hunter really hasn’t either but the team likes him and provides a big body at the Z and theoretical red zone threat.

Analysis: No movement here. Certainly no one on this roster who can push Grimble off. So the group remains the same with McDonald the starter.

Analysis: I’m sticking with the same eight I have all offseason, even though Jake Rodgers has had a nice start to camp. Just don’t see the compelling reason to carry nine and Rodgers isn’t a threat to get claimed off waivers. This frees up a spot elsewhere and makes one fewer tough decision for Colbert and Tomlin. This does assume Foster is ready for Week 1. If he isn’t, that could change the equation.

Analysis: McCullers has done enough in camp to show he’s worthy of being a backup nose tackle. Greg Gilmore, the man removed, sure hasn’t. Joshua Frazier can make it to the practice squad. Both guys can be kept and currently, there’s no other threat to the 53.

Analysis: Certainly feel more comfortable keeping Thomas this time around. Still plenty of prove but a pleasant beginning to training camp. Fort has great ST value too. Too valuable to cut.

Analysis: Adeniyi jumps onto the roster with the extra spot freed up by keeping only 5 receivers. Still worry about him on special teams but initially, he’ll be an easy decision as one of the seven inactive on gamedays. Think he’s going to have an impressive preseason.

Analysis: Arguably my toughest call of the roster. Keeping Coty Sensabaugh off, the 54th man on the roster. I think Marcus Allen will offer more on special teams and Sutton is the next man up at corner, not Sensabaugh. Enough confidence in Brian Allen for an “in case of emergency” situation, too.

Analysis: Keeping it the same until we see Marcus Allen in game action. I think he can roll some heads on the coverage unit. But if you cut and sent him to the practice squad, it wouldn’t hurt my feelings.

Analysis: Failing to deal Dobbs, they’d try to get him through to the practice squad. Not 100% sure if Tucker is still eligible. Hodges does enough to warrant a longer look, functionally a big receiver. With only 8 OL on the 53, you’re keeping two on the practice squad. Parker Collins could still push Morris. Kelsey has looked better in Year Two as a thumper against the run while Phillips is a mini Mike Hilton and Golden is one of the few FS types on the roster.