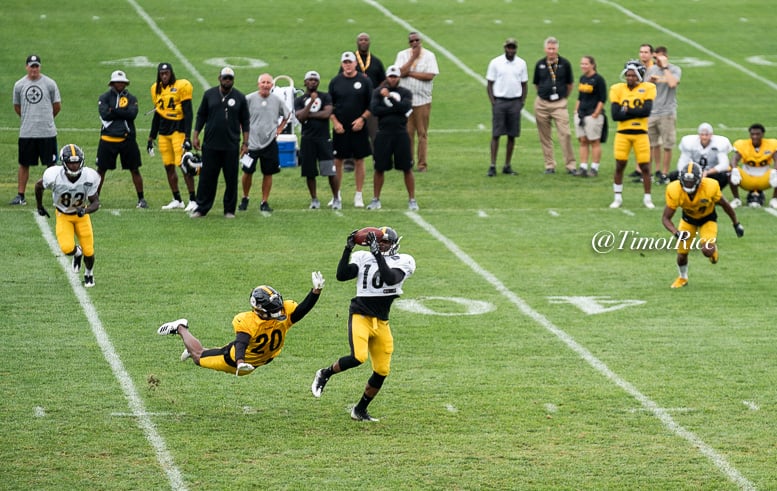 A little more information this time around, the Pittsburgh Steelers wrapping up all 15 practices and concluding their first preseason game a week ago. Still plenty of time left for things to change but here’s my current guess at the roster and practice squad.

Analysis: Josh Dobbs has talent to warrant a spot on a 53 roster and can be a competent backup in this league. But this isn’t the group he’s going to be able to crack.

Analysis: Flipping my selection from Stevan Ridley to Toussaint. Toussaint undoubtedly has superior special teams value and a guy you trust to do a little of everything if Bell goes down. Ridley being injured doesn’t help him either.

Analysis: This is still a tough one. Don’t like Damoun Patterson’s odds of making the 53, far too inconsistent at this point, but Marcus Tucker is coming on strong. For now, sticking with the five, but definitely a debate to be had here. Tucker the 55th guy on my roster right now.

Analysis: It’s hard to get a great read on this situation with all the injuries. But assuming McDonald and Grimble are ready for Week One, this is going to be the group.

Analysis: These are the eight locks and with each week, it looks increasingly unlikely that the team keeps a 9th, unless there’s someone who gets cut they really end up liking. Okorafor has played well overall.

Analysis: Feels practically certain these are the six. If there’s anyone here in danger of getting cut, it’s actually become Walton. I don’t think that ultimately happens though.

Analysis: Thomas has enough intrigue with his athleticism and the Steelers seem interested in his pass rush ability. He might not be active right away but a good stash candidate to give them some quality depth.

Analysis: Ola Adeniyi winds up being the 54th man on my roster. Nothing that he has done wrong but I believe he can make it through waivers and is a solid stash candidate on the practice squad. He’s not ready to see the field yet, even on special teams. Can call him up whenever there’s an injury.

Analysis: It’s a defensive backs world and we’re all living in it. With a team who wants to use as many as 7 DBs during the game, it wouldn’t be a shock for them to go super heavy in this group. Sensabaugh isn’t a starting corner but as a #6? That’s fantastic.

Analysis: I’m on the Dangerfield train. A guy who saw serious playing time on the defense just two years ago, he’s an excellent special teamer and a guy who is making more plays in coverage than he has ever before. Marcus Allen and Malik Golden are still in play but going with the known commodity here. It’s nice to keep around at least some players who have played in this system, too. 11 DBs is super heavy but like I said, you follow the talent and the guys who can produce, especially on special teams. Dangerfield beats out Adeniyi.

Analysis: Yes, he’s coming off a bad game, but my evaluation runs deeper than a couple of punts in Green Bay.

Analysis: Steelers will attempt to stick Dobbs on the practice squad. Tucker and Patterson are high probability names for the practice squad. Going Banner over Rodgers for one of my changes. Joshua Frazier is a surprise cut but if you forgot about the draft pick label and his relationship to Karl Dunbar, has he done anything to warrant a spot on the team? Don’t need three nose tackles on this team anyway. Like what Hooks has done.

Adeniyi shifts to the practice squad alongside Huguenin, who has impressed as a pass rusher. Removing Dashaun Phillips after going so heavy in the secondary on the 53. Still searching for a way to get Malik Golden on the practice squad. Having trouble making the numbers work though.