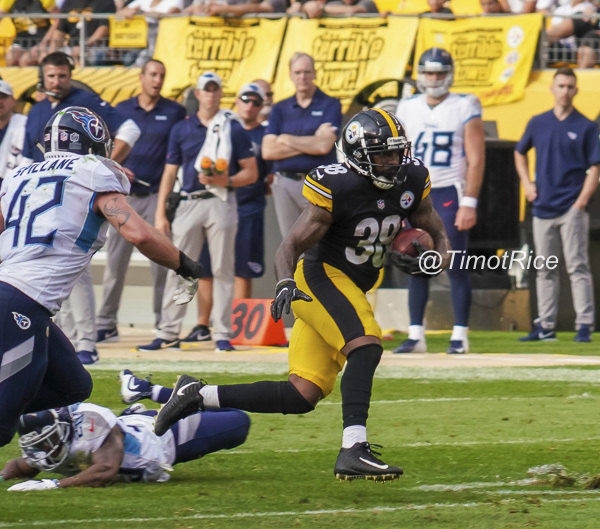 My final outlook on the Pittsburgh Steelers 53 man roster and practice squad. Unfortunately, been a little muddied up by some of the injuries suffered Thursday night. But here’s my best crack at it.

Analysis: I know Josh Dobbs is the hot topic after a legitimately great finale but it’s not enough to move the needle. There’s simply more trust in Jones to come off the bench than there is in Dobbs. Beating up the Panthers C team isn’t enough. Dobbs likely gets dealt for a 7th round pick. As I’ve said before, keep an eye on the AFC West. Lot of fits.

Analysis: Again, leaving things the same. Potential to keep a guy like Fitzgerald Toussaint around as the 54th man, roster exemption for Bell. The fact Samuels played so little in the finale, while not a guarantee, tells me the Steelers have seen what they needed to see. He’s going to offer more on offense than Toussaint.

Analysis: Spot was never in doubt.

Analysis: Marcus Tucker (ankle) didn’t play, Damoun Patterson left with turf toe, and I don’t think anything that would have happened tonight would’ve changed things anyway. Hunter has seemed to lock up his roster spot, whether you like it or not. Team loves the big play potential.

Analysis: As I’ve said before, could get some movement here if there isn’t enough faith in McDonald and Grimble’s health. Although Bucky Hodges had a nice game against Carolina, he’s not in position to make the 53.

Analysis: No changes here unless they bring in an outsider. But can’t see anyone internally elevated to the 53. Some good practice squad candidates but no one worth carrying here.

Analysis: Nothing changing here either. Good to see Daniel McCullers back out there. I like Lavon Hooks. Just no room for him here.

Analysis: This is where it gets tough. Putting Fort back on as one final change. It’s questionable if he’ll even get a hat right now, Matthew Thomas will certainly be active, but Fort is a worthy special teamer and it’s a position that still needs. More competition, the better for this group, far as I’m concerned.

Analysis: Adeniyi’s hamstring injury makes this situation tough to figure out coming right off the game. But even if it’s a week or two issue, he can be inactive early on in the season. He was going to be either way on my list.

Analysis: Sticking with Sensabaugh here. Though he hasn’t played much in the slot, he’s still capable of it, and that’s valuable given Mike Hilton’s injury and if Sutton ends up playing outside at some point this season.

Analysis: Another difficult call with Marcus Allen, who played and played well in the finale. But for now, I think he’s a practice squad candidate and call-up whenever injury strikes in the secondary.

Analysis: We’re not talking about him. That’s a great thing.

Analysis: Several changes where again, some of the injuries make this more difficult. Keith Kelsey and Malik Golden’s injuries take them off these lists with Golden almost certainly winding up on IR. Dangerfield still has eligibility left.

At this point, I don’t see Dobbs clearing waivers and the Steelers trading him. So not even humoring myself by adding him on here. Franklin was the only option left at RB but like I wrote before, I’d find someone else. Bummed Patrick Morris didn’t play so I swap him back in for Prince. Watch out for Chris Schleuger though.

Open spots allow me to keep Hodges, who made a couple impressive plays against Carolina. Even if McDonald/Grimble are ready for Cleveland, they could miss practice time over these next 10 days. So for now, Hodges sticks.

Hooks has earned his keep. Huguenin rounds out depth at OLB, especially if Adeniyi is going to miss some time.