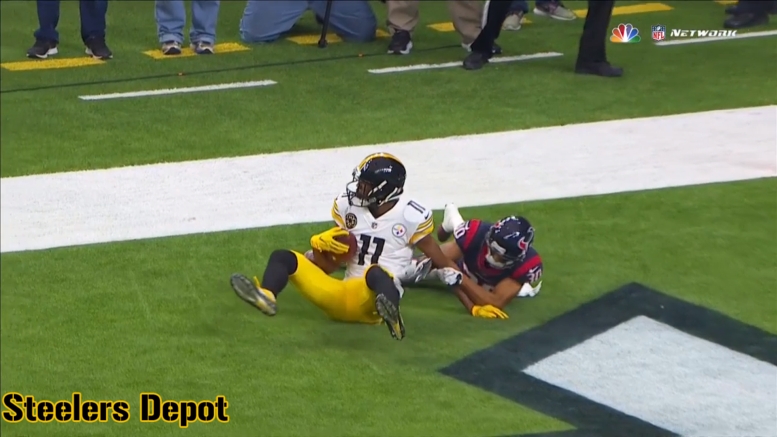 The multiple calls upon Justin Hunter as a player whom the Pittsburgh Steelers need to step up this season have elicited a variety of reactions from fans. Some are actually intrigued by the possibility of the sixth-year journeyman stepping into a bigger role, though the majority seem to be terrified by the prospect.

As should be no surprise, it is an opportunity that the wide receiver readily embraces, assuming that it even comes. Hunter spent some time last year as the number four wide receiver on the depth chart, catching only four passes for one touchdown, and he figures to be no better than number four again this season.

Though the Steelers traded Martavis Bryant, they also added James Washington as a rookie via the second round of the 2018 NFL Draft, and he is a player that the team anticipates being an immediate contributor.

But the veteran, a former second-round pick himself, sees within him the ability to be that player who takes over Bryant’s role.

“I can definitely be that guy”, he told the Pittsburgh Post-Gazette earlier this week. “I’ve been that guy my whole life, one of those guys in that category. I just have to keep working at it, be on the same page with Ben and things start clicking”.

Ben being Ben Roethlisberger, the Pittsburgh Steelers’ quarterback, who also appears to be optimistic about the possibility of Hunter seeing more playing time. Then again, I’m not sure he has ever seen a tall skill-position player that he didn’t like.

The top receivers during much of that run were Hunter, Washington, and Marcus Tucker, but the Steelers recently re-signed Eli Rogers, who could make a push up the depth chart when he is healthy enough to practice. He remains on the Physically Unable to Perform list as he continues to rehab from an ACL tear he suffered in the team’s mid-January postseason loss.

Hunter had a limited impact last season, but he also only dressed for seven games. He knows that that needs to change if he expects to see the football this year. In order to do that, he will have to continue doing what he is already showing during practices and then translate that into stadiums.

“If I just make it happen on Sunday and show what I do in practice on Sundays, things should open up”, he said. Which would be equally true of himself and of the defense. Because if he is going to replace Bryant’s role, or even part of it, then he is going to be a deep target (averaging 16.2 yards per catch in his career) and a red-zone threat (13 touchdowns on 82 career receptions).

“The coaches know I have a vertical leap and I’ve got to put that into the red zone”, he said. “That’s where the money is going to be made”.