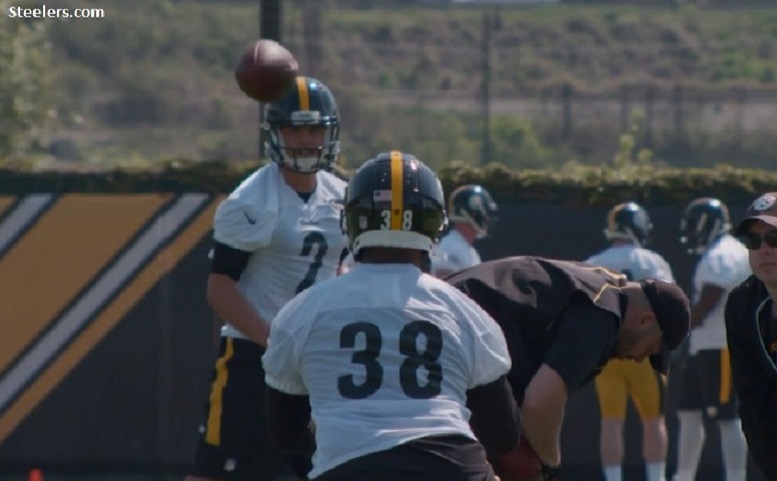 The Pittsburgh Steelers drafted a running back for the second straight year—sort of, anyway. Jaylen Samuels was not necessarily a running back at NC State, but the team intends to make him one. They called him an H-back in college, and he worked out with the tight ends at the Combine.

He did run the ball, but not a lot of his carries came via the traditional method for the running back. He got the ball in space a lot, but he often made the most of those opportunities. In addition, he was an active participant in the passing game and got a lot of work out of the slot.

That’s all well and good, but he is trying to make the Steelers’ roster as a running back, and with that comes responsibilities in pass protection. That is not something that he was asked to do much at all at the college level, and he has had some growing pains in adapting to it in training camp.

When thrown into the fire in the backs on backers drill, he struggled, and Head Coach Mike Tomlin had him repeat reps until he did it better. He was asked during practice on Monday what sort of reaction he had to being singled out by the coach in that manner.

“I didn’t have a reaction at all. I mean, if he wanted me to go five more after that, I would have still gone up there and did what I had to do”, he told the reporters gathered around him. “I guess he was just trying to see my physicality and how I react with the backs on backers, but, you know, I [will] do whatever”.

It’s a fair point, because just because he did not do something much at the college level does not mean that he lacked the willingness to do it, or that he would not be able to do it as he transitions into the NFL. Many rookie running backs struggle in pass protection. But why so little work in that area in college?

“I was getting the ball”, was Samuels’ simple answer. “I was in a route or [carrying the ball]. They didn’t really ask me to do much pass protection”. And to that point, when he was on the field during passing downs, he ran a lot of routes. Last season, he caught 75 passes. He has averaged 65 receptions per season over his final three years at NC State.

He rejected the notion that he couldn’t do it, however, saying, “I did a lot in practice, but not really in game-time situations”. He said that you learn the skill through repetition. “Through individual drills. That’s what Coach [James Saxon] does. We work on a lot of techniques and skills relative to our position, so individual drills, and working on our hand placement”.

There is no doubt that pass protection is one of the areas in which the Steelers will try to get a good look at Samuels during the preseason.