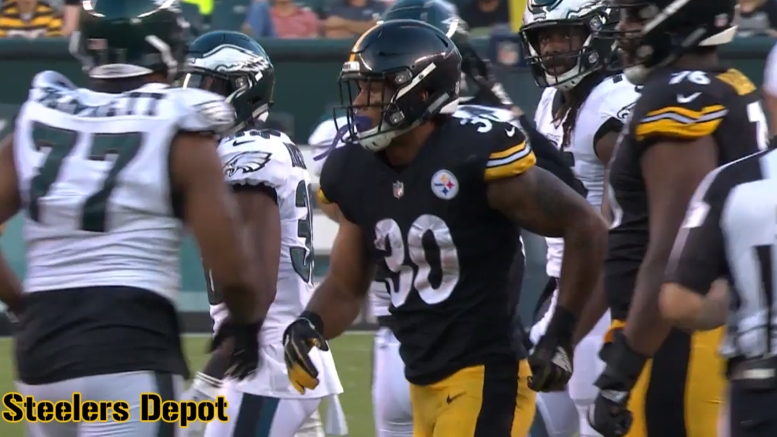 It doesn’t seem as though there is anybody that is less impressed with James Conner’s performance last night than James Conner himself, the Pittsburgh Steelers’ second-year running back who is looking to carve out a much bigger role for himself.

His playing time was limited, with the starters exiting early, but he dominated one drive, compiling 58 yards—plus 15 yards in penalties—on just three carries, which was punctuated by a 26-yard scamper for the touchdown.

“I just want to be in shape, first and foremost”, he told Missi Matthews after the game. “And then you just try to be consistent. All throughout OTAs and training camp and then game situation, I just wanted to put it all together and show my teammates that I’m accountable”.

That was his attitude about the performance that he turned in, not focused about what he did but about what he still has yet to do. I’m sure that he’s satisfied with what he was able to do on those three carries to march his way into the end zone, but he realizes, for one thing, that he has other things to prove, and for another, he has to keep doing that.

He talked about being consistent, and of the importance of being consistent, which is something that makes Le’Veon Bell so great. He may not have had the explosive plays you want to see out of elite running backs last year, but what he does give you is a consistent showing with a high percentage of successful carries and few losses.

Conner has been consistent so far this preseason, albeit under a limited body of work. Through two games, he has carried the ball nine times for 83 yards and one touchdown. He only has one reception so far but it did go for nine yards.

The former third-round pick came into the spring in much better shape, perhaps the best shape he’s ever been in his entire life, which was just the beginning of the work that he has put in. He has run the ball very well so far, which bodes well for the season.

What I hope to see in the next game especially is for him to get a much bigger role in the passing game. I want to see him get a handful of passing targets in a game and be asked to pick up blitzers and pass protect several times. He knows as well as anybody how big that part of the game is.