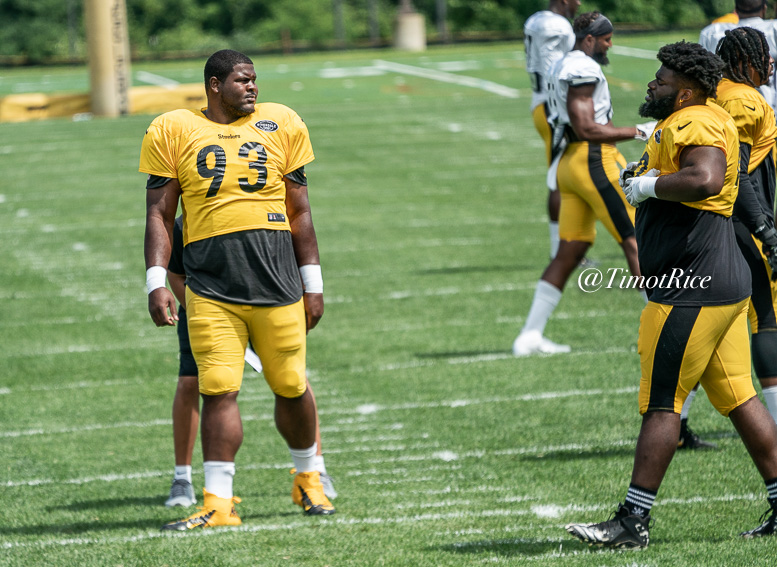 What Pittsburgh Steeler will capture the 6th defensive line spot?

In the red corner, standing in at 6’7 352 pounds, out of Tennessee, Daniel “Shade Tree” McCullers!

In the blue corner, standing in at 6’3 321 pounds, out of Alabama, Joshua “Sex Machine” Frazier (legit his nickname by the way)!

That’s the way the battle is shaping up. A two horse race. Two very large, sweaty, out of breath horses.

And that’s not a shock. Those are the two names we expected to hear the most. But you can discount my pre-camp darling Greg Gilmore, stuck running 4th team nose tackle, and not bringing much to the table aside from his impressive size, while the others have had non-descript camps. Parker Cothren, Kendal Vickers, Lavon Hooks, it’s not happening. Not the 53. Not without injury.

McCullers, as I have praised him throughout camp, surprising myself, could be considered the front runner. He seems to be playing with more fire that eluded him in the past. His camp has been like Evel Knievel’s best trip to the hospital. Not great but all things considered, could be worse. I guess.

Big Dan’s playing like a backup nose tackle whereas in the past, he played like someone who didn’t deserve a roster spot. The intensity, ability to work off blocks in the run game, and some big man hustle have all been on display. He’s still ROUGH around the edges, not always finishing plays and his height often works against him, but there’s actual progress. Hallelujah.

Then there’s Frazier. Obviously, much less of a resume to go off of. But he’s lived up to his scouting report so far, exhibiting a quick first step and powerful punch. It can be hard to watch nose tackles in camp, smack dab in the middle of the chaos, but he’s had a couple impressive practices.

After all, the Steelers are looking for a backup nose tackle, not an end. On gamedays, L.T. Walton is still going to be the backup, Pittsburgh only activates five, but the interior is still more of a pressing issue. McCullers is rising to the occasion. Frazier is pushing him.

Best of all, Pittsburgh is better off because of it.