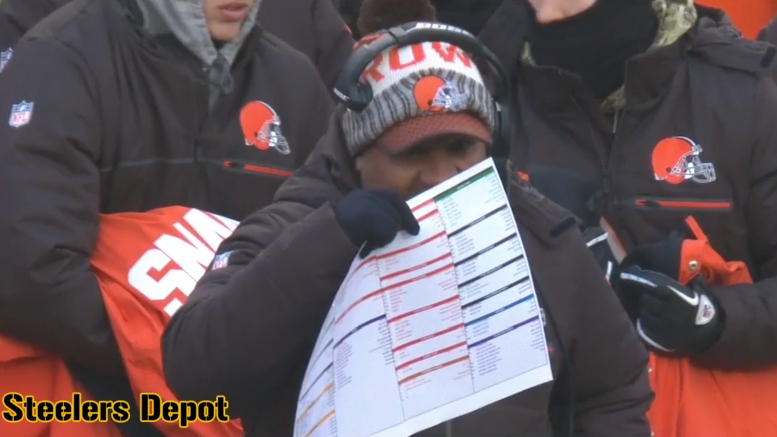 Are you ready for “the greatest turnaround in sports history”? Apparently former Dallas Cowboys wide receiver Dez Bryant is not, at least not quite yet. That is reportedly the sales pitch that Cleveland Browns Head Coach Hue Jackson made to the free agent when the latter recently came in for a visit.

Cleveland became just the third team in the Super Bowl era over a full season to post a winless record, going 0-16. This was the follow-up to a 1-15 campaign in 2016, making their 1-31 record over that span the single worst ever in NFL history. Essentially, they are the worst team ever, if you judge by wins.

Bryant’s visit to the Browns’ facility was featured on Hard Knocks, and that included a meeting between Jackson and the wide receiver. The coach asked him what he was looking for, to which he responded, ‘just looking for realness”. Here is Jackson’s conception of ‘realness’:

“Well, Dez, I tell you this opportunity that’s sitting before you, to me, is kind of unique in a sense that we’re at a time where I think we’re about to [rise up], at a time where you could help us get this organization back to where it rightfully should be”, as Charean Williams transcribed.

“The last two years have been hell. I’ll be the first to tell you that. But it’s going to take guys like you who love to compete, who love to go in these big stadiums, it’s like, ‘we’re here, and we’re coming here to kick your ass’. And that’s the kind of guys I’m looking for”.

Bryant expressed his fondness for the coach and for what he saw with the team, yet left without a deal. The segment ended with the wide receiver continuing to explain what he believes in ‘realness’ and described himself as a willing learner. He might have to learn to accept somebody’s offer soon.

Afterward, Jackson turned his sights to the season opener against the Pittsburgh Steelers, counting down the then 21 days remaining. “It’ll be unbelievable”, he said of the upcoming season. “This will be the greatest turnaround in sports history”.

They can start be simply winning a game, which they haven’t done in over a year. And frankly, teams coming off such terrible seasons are not very successful in turning things around very quickly. Like, winning two games is about what they should anticipate.

Jackson and his ‘Dawg Pound’ will begin their attempt at a turnaround seemingly a short time from now as they host the Steelers in the first game of the season. It’s been a while since they came out of a game against them with a victory, but they have made it interesting at times—usually when half a dozen starters have been missing.