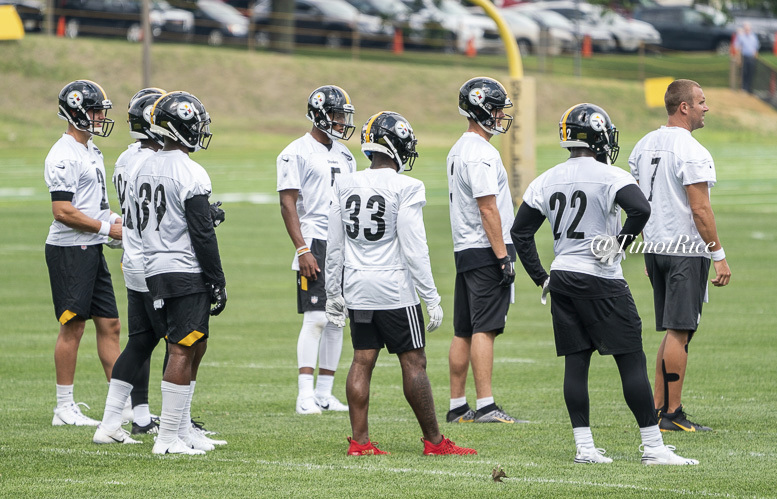 Veteran Pittsburgh Steelers running back Fitzgerald Toussaint probably knows that he faces stiffer competition for a roster spot than perhaps he ever has before, but he hasn’t exactly resigned himself to believing that he doesn’t have a chance. The third-year back showed during the team’s preseason opener that he is not going to give up his roster spot without a fight.

Originally an undrafted free agent signed by the Baltimore Ravens in 2014, Toussaint has been with the Steelers sign 2015 when they signed him to their practice squad at the start of the season. He was eventually signed to the 53-man roster later that year, but he also began the 2017 season on the practice squad.

This time around, the team has a full stable of running back, including three others who were on the 53-man roster a year ago, in addition to rookie fifth-round draft pick Jaylen Samuels. Second-year James Conner is clearly being used as the number two back behind Le’Veon Bell, but fellow veteran Stevan Ridley is also fighting for a spot.

Conner, Ridley, and Toussaint all got a fair amount of work for the Steelers during their opening preseason game against the Eagles, but Toussaint may have been the most impressive of the three on the ground, featuring a nifty 17-yard run with an open-field juke and a powerful score from a couple yards out.

An important part of the game for him is special teams, where he contributes to a number of different units, particularly punt coverage and kick returns. It’s unlikely that he would be able to make the team simply through his work as a running back.

One area in which he will surely hope to show growth over the course of the next three games is in the passing game, particularly as a pass-catcher, which has been a point of emphasis for the running backs this offseason.

While he had a slip-up or two when he had the chance last year, Toussaint is a player that the Steelers seem to trust in pass protection, and they have used him in that capacity. He has even flashed sporadic success over the past three years catching the ball, but it’s not a strength. He did not catch a pass on Thursday night.

Though many fans have seemed more than ready to see him move on to his life’s work for a couple of years already, his hard work has helped to keep him around for years, and he is hoping to continue to make himself available in 2018—a year in which, if I’m not mistaken, he retains practice squad eligibility.