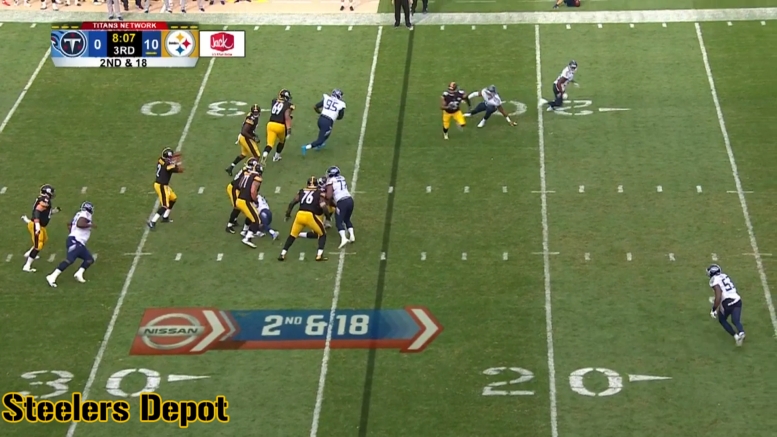 The trend du jour among Pittsburgh Steelers fans has evidently been to admonish the rookie quarterback in favor of the ‘veteran’ second-year quarterback who has yet to play a meaningful snap. Joshua Dobbs is currently all the rage, while there are actually people who want to trade Mason Rudolph already.

Forgive me for being an optimist, but I’m actually not ready to give up on Rudolph’s long-term future after three preseason games as a rookie. And in fact, I saw some things from the third-round pick in his last performance that were encouraging, and which I would like to take a look at below. A lot of it ended up being negated by penalties, so doesn’t show up on his stat line.

His first drive of the game was an extended one that ended in a field goal after a touchdown was nullified. In the midst of all that, he showed improved pocket awareness on several plays, especially in the Titans’ half of the field.

From the 14-yard line, for example, Rudolph scrambled out of the pocket to avoid pressure on second and eight, rolling out to his right. While keeping his eyes downfield, he scanned his options and found Pharaoh McKever at the two-yard line to set up what should have been first and goal from the two. But he has no mobility, right?

He had arguably my favorite play from him so far this preseason after that, now on second and 18. Again feeling the rush, the rookie did a nice job of moving the pocket and dictating where Roosevelt Nix would go, waiting until he would have an opportunity to catch and run. He did so for 12 yards.

It has to be noted that, while we don’t have the end-zone angle of this play, it looks like Rudolph could have hit tight end Bucky Hodges early in the play after the linebackers bit on play action who a pretty decent gain. We can’t see where the safeties were playing, however.

Still later on the same drive, after a touchdown pass was negated, the Steelers were facing a third and seven. Facing pressure, he scrambled for the first down, but wouldn’t you know, it was yet another play negated by penalty. If he had turned to his right, he might have been able to hit Jaylen Samuels, but at the risk of throwing an incompletion or even an interception, since it would be hard to get much zip on a pass throwing across your body from that angle.

On the next play was another example of Rudolph showing the adeptness to move the pocket, though it was ultimately an unsuccessful play on third and 17. Feeling the rush, he stepped back just enough to avoid pressure as Samuels flashed free from the left slot for a catch-and-run opportunity.

There weren’t a lot of opportunities for him for the rest of the game, but one play I wanted to note late was another scramble. I pointed out a couple of plays in which he could have tried to hit a target, or a different target, on a play for potentially better results. This was a clear example of where he should have checked the ball down to Samuels, both because the back had a better chance of gaining more yards, and also to avoid an unnecessary hit.

Rudolph still has a long way to go, but I’m also seeing progress along the way. It’s important to watch the plays rather than simply look at what the outcome was, to see what he was really doing. He has a lot of flaws, and one of them is trusting his arm, both when plays break down and on deeper passes. We’ll see what kind of growth he can show in his likely final significant look of the 2018 season tonight.