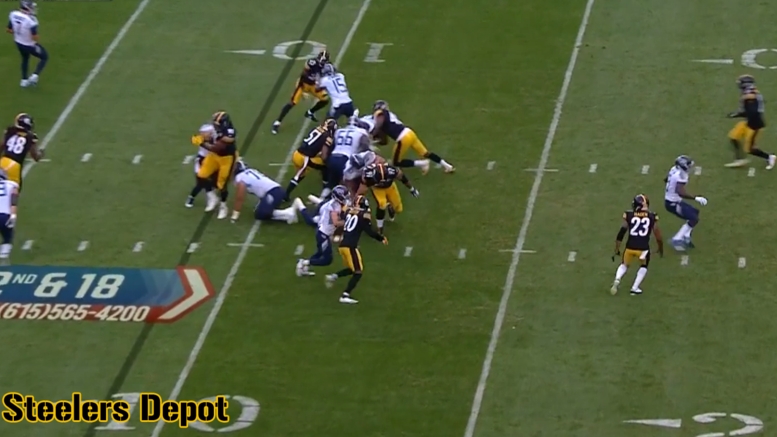 In a move that I would imagine surprised the vast majority of people watching, the Pittsburgh Steelers introduced the ‘Seminole’ package to the defense last Thursday when they hosted the Tennessee Titans in the third preseason game.

The featured player of that package is the rookie ‘Seminole’, Florida State’s Matthew Thomas, whom the Steelers signed as an undrafted free agent. He has been making his way up the depth chart and perhaps has the opportunity to emerge as a niche defensive contributor this season, though that’s still a bit of a leap to make.

The defense ran this package four times during the first half of the game against the Titans in ‘obvious’ passing situations, though one of those plays did result in a run. they all came on either third down or in second and very long situations, so let’s look at them here.

The first time it popped up was in the middle of the first quarter, the Titans facing a third and 10 at their own 20-yard line. This was the lone time that they converted, Marcus Mariota finding Tajae Sharpe on a crossing route against zone coverage. The receiver was able to get 11 yards, but Thomas, in zone coverage, closed on him fairly quickly.

Later, on the first play of the second quarter, Tennessee needed six yards on third down, but Mariota could not get off a good pass thanks to Stephon Tuitt. On the play, Thomas dropped into shallow zone coverage guarding the first-down marker.

On the Titans’ next possession, they found themselves in a second and 17 situation at their own 36. Thomas again dropped into zone coverage, this time toward the right (and off-screen thanks to the lovely preseason camerawork), but got himself into the play, making the tackle on a running back screen to Dion Lewis after two yards, heading in the opposite direction.

Finally, at the two-minute warning, facing a second and 18, the Titans just tried a draw run. Thomas did a nice job of stacking and shedding the blocker to make the tackle along with Vince Williams, the other Seminole on the roster who plays on the edge in this package.

So he got on the field with first-team personnel for four snaps, and he recorded two tackles and an assist on those plays. That’s a pretty good ratio. Not that tackling statistics are necessarily an indicator of a player’s level of performance, but he appears to have done a solid job in his cameo for this potentially short-lived package.