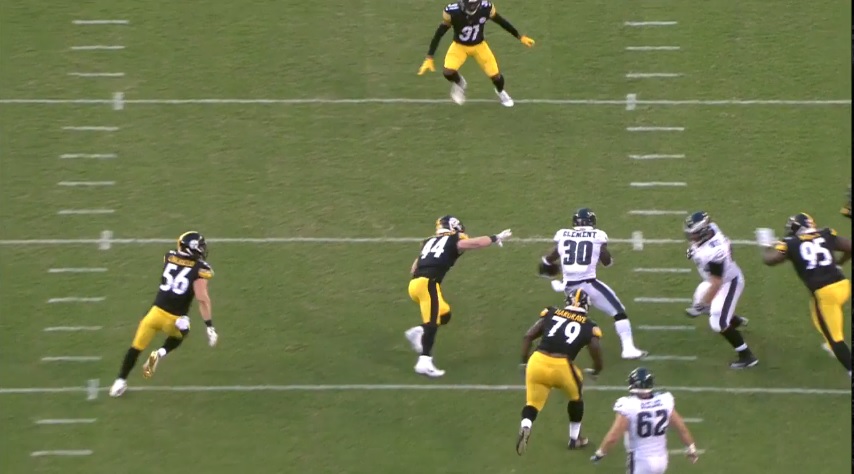 If Tyler Matakevich really intends to be a starting inside linebacker for the Pittsburgh Steelers this season, then he is going to have to show greater versatility than he did in the preseason opener, in which he was fine when he was playing forward but faltered when put in space.

A prominent example of the latter occurred late in the first quarter. With pre-snap motion, Matakevich was obligated to honor the potential end-around run, so as Corey Clement got the ball and took it up the middle, the linebacker was forced to readjust and was in space. The shifty second-year back turned him inside out and ran right past him, exposing some of his athletic shortcomings.

Still, he was more in his comfort zone a player later as he stopped the run for a three-yard gain. As long as his eyes are forward and doesn’t have too much lateral space to cover, he can handle his business, keeping himself clean and mirroring the ballcarrier.

Another example of him struggling in space came in the second quarter when he drew a blitzing assignment. Coming at quarterback Nate Sudfeld, Matakevich was unable to approach in control. It didn’t take much, just a quick step up into the pocket, and the linebacker could not make an adjustment, in fact slipping to the ground. Sudfeld, without the encumbrance of a rush to counter, was free to find an open target for a touchdown.

The third-year lienbacker played into the second half, though, and continued to show where his strengths lie. With the play in front of him, he is able to get to the ballcarrier and bring him down. He showed that he can do this in college. That was never really in question.

The question that still needs answering is what else he can do, and he didn’t show much at all in that regard throughout the rest of the game. We have seen hints of potential, showing ‘rush’ ability on two blocked punts last season, and he even defended a fake punt very well in breaking up a pass.

Those skills need to translate inside a stadium on defense though before anybody can be comfortable in putting him out there. So far it seems pretty clear that Jon Bostic is out in front in the race for the starting job.