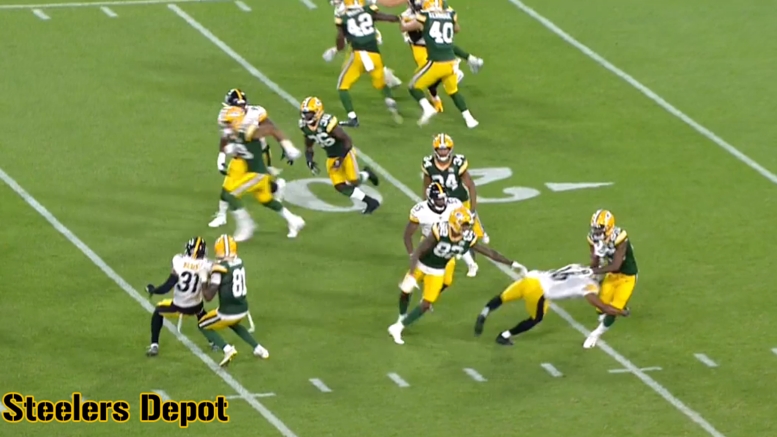 I tried to hammer home the importance of special teams work last season when I introduced a weekly special teams report during the regular season. I also dedicated a film session or two a week in which I focused about the performance of one particular player or unit to highlight for whatever reasons was appropriate.

So I’m working to get into midseason form here. After featuring Brian Allen yesterday, today I’m going to talk about the similarly expanding role of Marcus Tucker, a first-year wide receiver who has been on the practice squad for two years. He has received work in all four phases (punt coverage and returns, kick coverage and returns) this preseason as he pushes for a roster spot.

While he didn’t take ‘starter’ snaps during any unit, he did see a good amount of special teams work. During a punt return in the second quarter, he worked with the aforementioned Allen to stifle the Packers’ right gunner.

On the opening kickoff of the third quarter, he did a great job of securing the tackle, his first of two on the game to give him three so far this preseason, the most on the team. While the blocker and returner were not in sync here, the receiver’s effort to complete the tackle is commendable. A lot of offensive players struggle to dedicate themselves to the physicality of the coverage units.

Later in the quarter, he was featured on the kick return unit, set as one of two upbacks lined far afield of the lone returner, Quadree Henderson. He did a nice job of connecting the make the initial block, but his man was able to shed and make the tackle at the 26-yard line. In fairness, blocking on a kick return is one of the more unforgiving jobs due to the wide angles of pursuit and the inability to see behind you or know where the return is going to go.

Tucker also worked as a gunner on the punt team, on this occasion in the middle of the third running down the right sideline. Facing a single jammer, he did a good job of getting down the field, but Matt Wile’s 56-yarder covered too much distance to get far enough to make the tackle. He tried to spin back to the outside to keep contain but the gunner prevented him from getting there. Still he persisted, ultimately making the tackle 41 yards down the field.

Finally, at the end of the third quarter, he became what I believe to be the first person to draw a penalty for being blocked by two players under the new kickoff rules. Despite being knocked to the ground, he still made the effort to help ensure that the returner was down after a Nat Berhe tackle. Film Room Marcus Tucker Leading Way In Special Teams Tackles