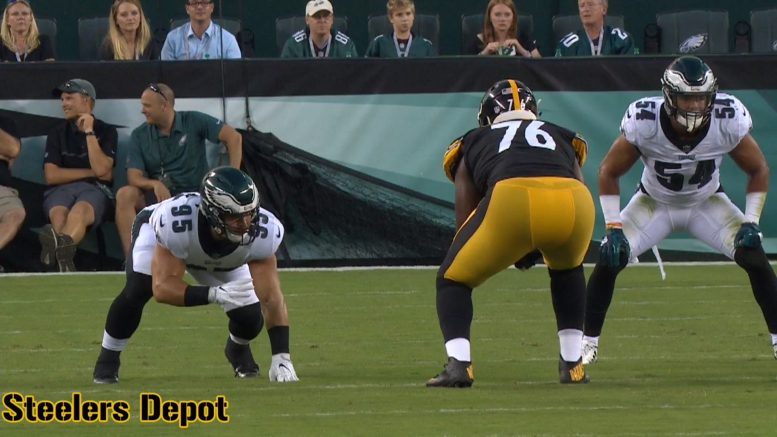 A lot of focus is being placed on rookie third-round tackle Chukwuma Okorafor this offseason and for good reason: he’s going to play this year for the Pittsburgh Steelers. Or at least that is the direction that we appear to be heading.

And that will happen whether there are injuries are not (and there are always injuries; I invite you to find the last season in which a backup tackle did not start at least a game). The Steelers like to use the tackle-eligible, and to use young players they want to break in for that role, and that is what Okorafor will be doing this year.

So yeah, long story short, people are interested in how Okorafor looked in the preseason opener, and honestly? He probably looked about how you would expect him to look based on what we already knew about him heading into the game. He’s definitely grown a lot, but he’s going to be winging it at times.

One of the things I would imagine the coaches will be talking to him about is finishing plays, which is especially important in Pittsburgh with a running back who likes to spend time in the backfield and a quarterback who is prone to holding onto the ball. I think this run at the end of the first quarter might serve as a teaching moment tool for Mike Munchak. Notice that he’s the only lineman not looking for work.

Of course his most important task will be protecting the quarterback, and he’s got some growing to do in that regard. He allowed Joshua Dobbs to take a shot late in the first half inside the red zone when he allowed the end to set him up for an inside move by dashing up the arc. Okorafor was not set to respond to the change of direction.

But you do see the potential and how it can all come together even before he has a full toolkit because of his natural size and athleticism. This late first-half play shows good feet and mirroring, even if it’s done a bit sloppily. But it was enough to get the job done.

The biggest thing that he’s going to have to work on is identifying and countering pass-rushing moves, which Alejandro Villanueva once talked about as his biggest hurdle early on. Here is an example from the second half in which he gets ripped underneath and allows a pressure, though the rusher could not complete the play.

This post wasn’t meant to portray Okorafor’s performance as a bad one by any means, and the specific plays highlighted here were chosen to make certain points. This is not a representation of the overall quality of performance, which I thought in fact was a pleasant surprise, but as I feel I’ve shown here, there are still some things to work on.