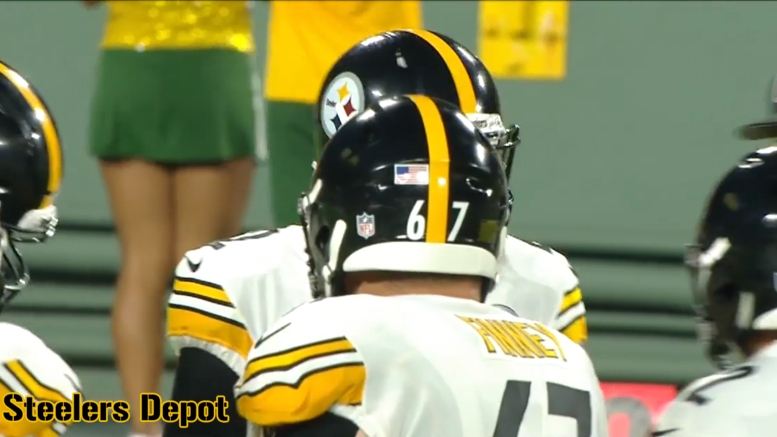 It seems only a matter of time before the Pittsburgh Steelers’ B.J. Finney enters the starting lineup on a full-time basis, and the likely position that he takes over will be the 32-year-old Ramon Foster’s, who is in the final year of his contract. Finney has made five quality starts playing in Foster’s left guard position over the past two years, and has gotten a lot of first-team work this summer due to his injury and Maurkice Pouncey’s being rested for the preseason.

He figures to start at left guard tonight, but against the Packers last week played center and right guard. In truth, he looked shaky at center, but so did almost the entire offense during the early portion of the game. On this eight-yard run by James Conner, for example, he got driven backward by the talented Kenny Clark.

He was at right guard already by the end of the first quarter, and again he seemed to be slow out of the gate, letting the lineman get into his frame, but he was able to anchor well until the rusher worked to the side. He ultimately held up, but this wasn’t one of his prettier reps. It often isn’t pretty with him.

He did a better job overall later on the drive, though I would be lying if I said part of the reason I highlighted this play was to feature Mason Rudolph’s stiff-arm, which frankly was a rare highlight on what felt like an incredibly long game. On Finney, however, he importantly kept his eyes moving, looking for work.

Clark got the better of Finney again in the second quarter on a run deep in Steelers territory. On first and 10, the defensive lineman stacked and shed against the right guard, using his long reach to his advantage before releasing to cut the runner down after a two-yard gain.

On the following play, he handled Clark better in pass protection, though with an assist from his center. Finney started to lose him late in the play as Clark drove himself deep around the edge of the pocket.

Finally, he got a chance to get on the move, leading on a counter run to the left. While he was able to meet the defender in the hole, there were two defenders there. Typically, the tight end would follow, and I can’t help but wonder if Bucky Hodges blew an assignment here.

Overall, this wasn’t one of Finney’s best looks, but the Steelers are also consciously getting him more work at center and right guard. Clark is no slouch to play against, either. In fact, the Packers’ front line overall is a tall task to contend with.