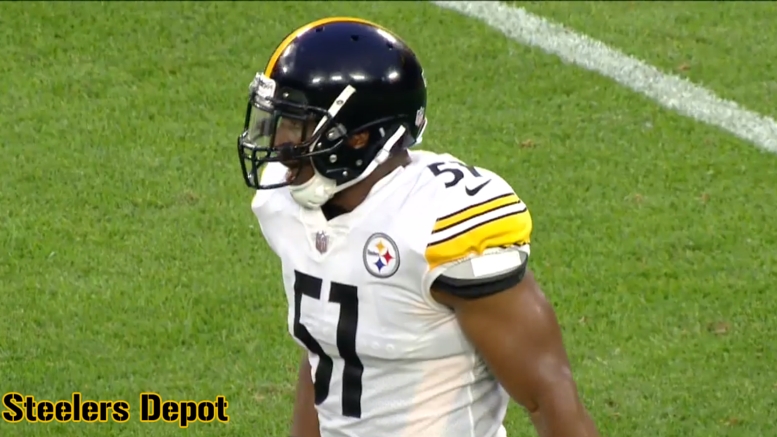 More eyes are on Pittsburgh Steelers inside linebacker Jon Bostic than just about anyone else tonight, and not without reason. The biggest question mark for the entire roster is what the team has available at the inside linebacker position, and Bostic’s early free agency signing felt like a contingency plan.

A former second-round pick, the veteran inside linebacker saw his most extensive and comprehensive work last season in his one year with the Colts, starting and playing in 14 games. The Steelers have seemed to settle in on him being their starter, so he’ll be watched like a hawk tonight. In the meantime, let’s go back to his performance from last week.

The first play of note is one that he would like to have back. Off the snap, it appears he may have been uncertain of his assignment based on what the offense showed, as he was late in dropping back into coverage. That likely influenced his being overaggressive and committing pass interference once Jimmy Graham was targeted on the throw.

He did make the tackle on the following play on running back Ty Montgomery, though after a six-yard gain. The line did a good job on this play of turning Vince Williams out of the hole and sealing Daniel McCullers, which left a vacuum of space that Bostic had to get to.

Late in the first quarter, the Steelers blitzed both of their inside linebackers, Williams taking the first shot and Bostic following. The fullback frankly looked lost on the play, and Brett Hundley ended up rolling out to his right and throwing the ball away.

Into the second quarter, as Bostic played in zone coverage, he worked to meet the running back catching a short pass in the flat. He swum by the offensive lineman trying to cover him but the big man’s feet tripped up the linebacker. The former was injured on the play attempting a dive block.

Later on the drive, at the Steelers’ 26, he came in on a run blitz and helped clog the lane as a buck should, taking on the fullback as Williams and others brought the running back down for no gain.

Finally, late in the half, he escaped the arm hold of an offensive lineman to help chase down and tackle the ball carrier after he got strung out wide, delivering a big hit in the process.

Still, overall there isn’t a lot to go on in judging Bostic’s play, despite the fact that he has seen a decent number of snaps. He hasn’t made much of an impact either positively or negatively yet. Hopefully that changes (for the better) tonight.