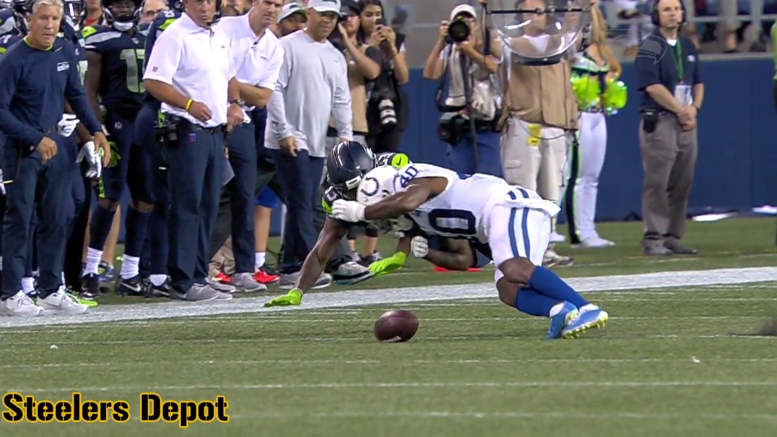 The NFL made it a point of emphasis to curb the use of the helmet as a weapon this offseason, in doing so passing new rules that would in theory help to discourage such practices. One of the methods by which they went about doing this was in loosening the standards for which an illegal hit would warrant an ejection.

And evidently the first ‘victim’ of this tighter enforcement was former Pittsburgh Steelers safety Shamarko Thomas, who was ejected from his game last night with the Indianapolis Colts following a helmet hit to the helmet of a Seattle Seahawks wide receiver.

Thomas, a 2013 fourth-round pick, spent his first four seasons with the Steelers, but was not re-signed a year ago. He was a free agent throughout the offseason before the Colts picked him up at the start of training camp late last month.

The Syracuse product earned the nickname ‘Headache’ during his college career, which was a reference to his hard hits on the football field, some of which left him with a ‘headache’, or basically in other words, a concussion.

Thomas did not spend much time participating on defense during his time with the Steelers. In fact, the bulk of his playing time in that regard came as a rookie when he was used as a nickel slot defender. He received very limited playing time, usually due to injury, over the next three years, though he was a fixture on special teams.

Late in the contest for the Colts, Thomas was looking to assure that the Seahawks receiver would have no chance at making an attempt to catch a pass that it seemed clear he would not be able to, having allowed the ball to bounce off his hands.

The former Steeler clearly and visibly launched himself leading with his helmet into the helmet of a defenseless receiver. Under the new ejection rules, the incident was briefly discussed and it was then determined that it qualifies.

While the penalty itself would of course have been a penalty under the 2017 rules, I do think that the new standards for ejection were at play in the decision to eject Thomas on this play, which is perfectly valid.

In that sense, unless I missed one while I was in Germany, you could say that Thomas is the first player held accountable to the fullest extent under the new helmet rules by being ejected from a game.

Ejections are reviewed by the officiating headquarters in New York, and they have the authority to overrule the decision to eject a player, but it must come before another play is run.