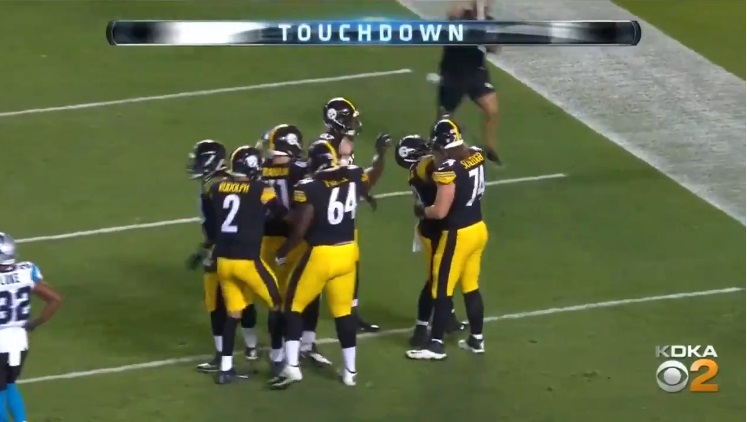 The Pittsburgh Steelers put the finishing touches on their preseason with a 39-24 victory over the Carolina Panthers at Heinz Field tonight.

For some, the final preseason game is a second to catch their breath before the regular season kicks off. For others, it is the difference between a roster spot and potentially the unemployment line. That was the case for quarterback Josh Dobbs. Playing for a roster spot, Dobbs did all he could to impress the Steelers’ coaching staff.

Dobbs took the football on the Steelers’ first drive and put seven points on the board with his legs. After connecting with tight end Bucky Hodges on a 36-yard pass which brought the Steelers down to the goal line, Dobbs leaped over a couple Panthers’ defenders to score the game’s first touchdown.

The Steelers quarterback would come right back and add the team’s second touchdown through the air. A 46-yard completion from Dobbs to Justin Hunter would lead to another big play as Dobbs connected with Tevin Jones on a 27-yard strike to the corner of the endzone to put the Steelers up 14-0.

With his name on the roster bubble, Dobbs exited at the two-minute warning, going 8/12 for 151 yards passing along with one passing and rushing touchdown.

While the Steelers offense looked to setting the tone for the entire first half, it was the defense with an opportunistic sucker punch to the Panthers’ offense to close the first half. Outside linebacker Ola Adeniyi rushed the pocket, stripping Panthers’ quarterback Taylor Heinicke, with the football being recovered by Keion Adams.

The fumble would lead to the early arrival of Mason Rudolph, who connected with Jones for the receiver’s second touchdown of the game, giving the Steelers a 25-7 lead. Rudolph displayed great accuracy on the touchdown throw, threading the needle in between three Panthers defenders.

Dobbs was not the only player on the bubble looking to make a name for themselves as receiver/returner Quadree Henderson also made an impact during the second half. Featured primarily as a returner through the first three games, Henderson got a real shot at playing receiver in the second half and showed his worth, one handing a jump ball from Rudolph in the red zone to put the Steelers up 32-10.

Many fans have been calling for Matthew Thomas to be the Steelers answer at inside linebacker and Thomas made perhaps the play of the game, stripping the Panthers’ quarterback and then returning his own sack 74 yards down to the Panthers’ one-yard line. With his explosiveness and athleticism, Thomas continues to show poise whenever he graces the field.

The Steelers defense had another decent performance as their 24 points allowed included two late fourth quarter touchdowns with the game already put away. It was another rebound performance from the same defense that allowed 51 to the Green Bay Packers two weeks ago.

With the pre-season now over, the Steelers will get to their final roster cuts to finalize the 2018 edition of their roster. The next time the team will be in action will be under the bright lights of the regular season as they head to Cleveland to take on the Browns on September 9 at 1:00 pm EST.