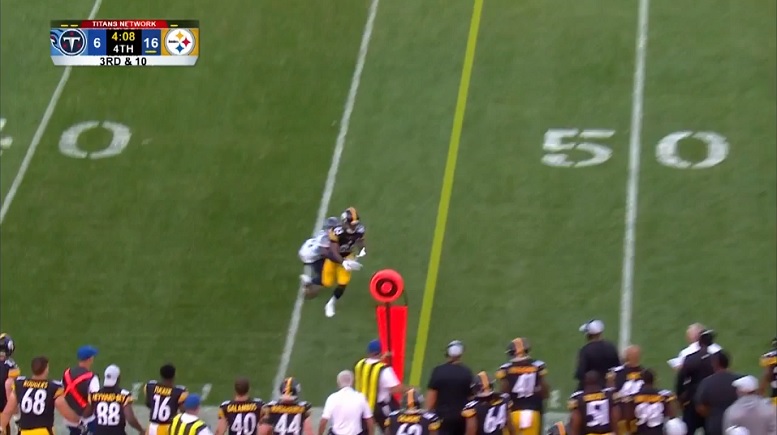 After catching 6 passes for 77 yards and a touchdown in the team’s 2018 preseason opener against the Philadelphia Eagles, Pittsburgh Steelers rookie wide receiver Damoun Patterson has had a few relatively quiet games since and one now has wonder where his odds of making this year’s 53-man roster currently sit.

Patterson, who signed as an undrafted free agent after participating in the Steelers annual rookie minicamp on a tryout basis, failed to catch a pass in the team’s Saturday preseason home game against the Tennessee Titans. While Patterson did play a total of 25 second half offensive snaps against the Titans, he was only targeted twice by rookie quarterback Mason Rudolph in those five meaningful possessions.

In the Steelers second preseason game against the Green Bay Packers, Patterson caught 3 passes for 35 yards in the 48 total snaps that he played. All three of those receptions in that contest came via throws from Steelers second-year quarterback Joshua Dobbs, who was also responsible for throwing 3 other competed passes to Patterson in the preseason opener against the Eagles.

The Steelers are expected to keep at least five wide receivers on their initial 53-man roster this year and maybe even as many as six in total. In all likelihood, Patterson might need to hope that six are kept and that he’s ultimately No. 6 and especially if the Steelers choose to retain two of their other veteran wide receivers, Darrius Heyward-Bey and Justin Hunter, who caught a long touchdown pass from quarterback Ben Roethlisberger in the first half of Saturday’s game.

At worst, Patterson will likely land on the Steelers practice squad this year if he fails to make the 53-man roster. With one preseason game now remaining, Patterson figures to play extensively in it and especially if two of the team’s other young wide receivers, James Washington and Marcus Tucker, both ultimately miss the home exhibition finale against the Carolina Panthers due to injuries they suffered Saturday against the Titans.

Patterson’s large amount of playing time against the Panthers also figures to include him playing quite a bit with Dobbs as his quarterback. If Patterson can have a repeat performance of his game against the Eagles Thursday night at Heinz Field against the Panthers, he’ll make himself tough to cut. However, another quiet night similar to the one he had Saturday against the Titans will likely result in him being waived a few days later.