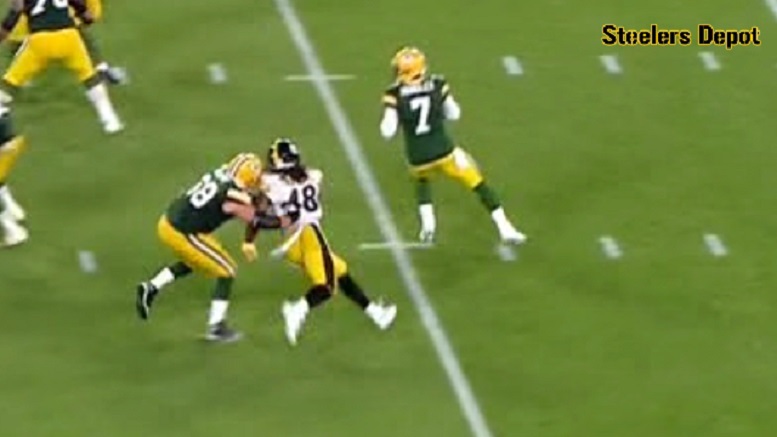 Pittsburgh Steelers outside linebacker Bud Dupree made his 2018 preseason debut Thursday night against the Green Bay Packers and the former first-round draft pick out of Kentucky played the first four defensive series and his night ended with him being credited with one sack, and four total pressures. So, was this a good 2018 debut for Dupree from a pass rushing standpoint? In a word, yes, but that answer does need some contextualization just the same.

For starters, Dupree started the game by going up against Packers starting left tackle David Bakhtiari. In total, Dupree rushed against Bakhtiari five times before the Packers tackle exited the game for good and the Steelers outside linebacker never sniffed the quarterback during those rushes, despite other writers on other sites claiming that he did. You can clearly tell they were going off of stats and never watched the tape.

Dupree, however, did register a few pressures/hurries while Bakhtiari was in the game, but as you can see in the gifs below, two of them came with the Steelers outside linebacker rushing up the middle after beginning the play lined up well off the the ball. On one of those two, Dupree was allowed to run free while the other pressure was a result of him beating Packers running back Ty Montgomery to the inside.

Now, Dupree did have some success against a Packers left tackle Thursday night, but it wasn’t Bakhtiari. Instead, Dupree beat tackle Kyle Murphy to the outside twice after the former sixth-round draft pick out of Stanford had flipped from right side to the left side to replace Bakhtiari.

You can see Dupree’s wins against Murphy below and both were essentially speed rushes around the edge. On the pressure/hurry, Dupree does manage to knock away Murphy’s left arm on his way to winning the edge. On Dupree’s sack, however, he really didn’t use his hands as well as he did on the previous pressure. Instead, his speed and get-off is what essentially won that rep for him.

While it’s certainly great to see Dupree win on the right side via essentially a speed rush around the edge, it would still be great to start seeing him win in other ways moving forward into the remainder of the preseason. We already knew he has a great get-off and an ability to win the edge occasionally. That’s not new news. It would also be great to see Dupree start winning on that right side against starting left tackles moving forward and not their backups.