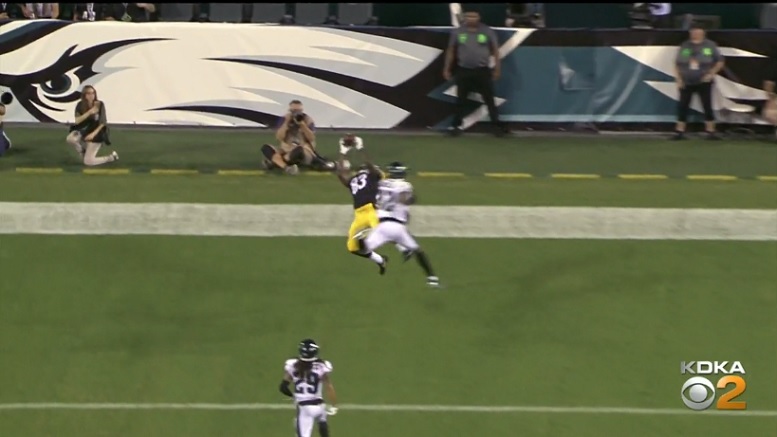 Pittsburgh Steelers second-year quarterback Joshua Dobbs made his 2018 preseason debut Thursday night against the Phioldelphia Eagles as he followed starting quarterback Landry Jones into the game after his night was through. Dobbs, who was selected in the fourth-round of the 2017 NFL Draft by the Steelers, completed 9 of his 13 pass attempts for 91 yards with one touchdown and one interception Thursday night on his way to leading the offense to two first half scores.

Below is a contextualization of Dobbs’ 13 total pass attempts from Thursday night. This contextualization includes a gif of his ball placement throughout the game in addition to other play-by-play data such as air distance, direction and who he threw to.

The thing that sticks out the most about Dobbs’ 13 pass attempts against the Eagles is the fact that only two of them flew more than 10 yards past the original line of scrimmage. One of those two was his late second half touchdown to wide receiver Damoun Patterson with the other one being his lone interception of the game.

Two of Dobbs’ 9 total completions Thursday night went to running back Stevan Ridley via check-downs. It’s also worth noting that Dobbs’ overall accuracy against the Eagles wasn’t top-notch. He threw low on a few attempts and seemingly forced a few other attempts that ultimately wound up being incomplete. It will now be interesting to see if Dobbs can improve his timing, decision-making and ball placement this coming week in the Steelers second preseason game against the Green Bay Packers.

From a statistical standpoint, Dobbs’ mostly shorter throws Thursday night resulted in him registering an intended air yardage average of 7.0. His completed intended air yard average Thursday night was 6.44 yards. We’ll continue to contextualize all of Dobbs’ pass attempts throughout the remainder of the 2018 preseason for you.