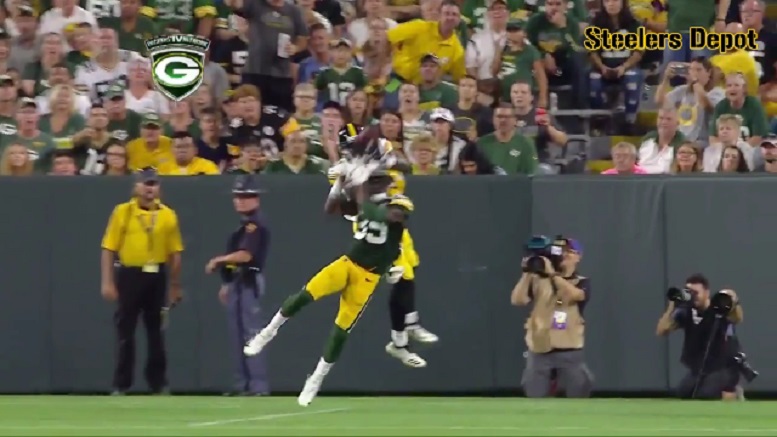 Pittsburgh Steelers second-year quarterback Joshua Dobbs had his best performance of his fledgling NFL career Thursday night against the Green Bay Packers as the former fourth-round selection in the 2017 NFL Draft out of Tennessee completed 12 of his 18 total pass attempts for 192 yards and 2 touchdowns and 1 interception during the second half.

While Dobbs’ Thursday night showing started off on the wrong foot when his first pass attempt of the game, a 10-yard out-route to wide receiver Damoun Patterson was intercepted and returned for a touchdown, he did rebound nicely and quickly with a three play, 45-yard drive that culminated in a 19-yard touchdown pass in the end zone to rookie wide receiver James Washington. Dobbs would go on to lead two more scoring drives in five more offensive possessions.

As I mentioned in the contextualization post of Dobbs’ 2018 preseason debut against the Philadelphia Eagles, this week I was looking to see if the young quarterback could not only push the football down the field more than he did in the opener, but show better accuracy and make decisions with the football as well. For the most part, Dobbs was able to do just that.

As for his decision-making against the Packers, Dobbs seemingly improved in that area this week as well. Outside of his first pass attempt, he appeared to make good decisions with the football the rest of the contest.

Dobbs’ accuracy, while overall better this week against the Packers, still needs some improvement, however. His two touchdown passes to Washington against the Packers both could’ve been easily intercepted. Thankfully, Washington enters the NFL as an accomplished combative catcher and was thus able to bail out Dobbs twice for scores. The first throw needed to be much deeper and higher while the second one, a perceived back-shoulder throw, needed to be more to the outside where only Washington would have a shot at the football.

While Dobbs had another deep pass in the game that could probably be viewed as interceptable, his target on that throw, wide receiver Trey Griffey, did loose his footing at the top of the route. It would’ve been interesting to see the outcome of that deep pass attempt had feet not gotten tangled.

I have an animated gif below that includes the ball placement of all 18 pass attempts from Dobbs Thursday night. Additionally, I have included a passing chart of those throws in relation to where they were from the original line of scrimmage. The two white dots signify Dobbs’ touchdown passes against the Packers while the yellow dot shows his lone interception. The blue dots are his other completions while the red dots are his other incompleted passes. All are marked as if the 30-yard-line was the original line of scrimmage.

At the bottom I have included a table that adds context to all 18 of Dobbs’ pass attempts against the Packers. That data includes pass distances, intended targets, yards after the catch, down, distance, time and more.