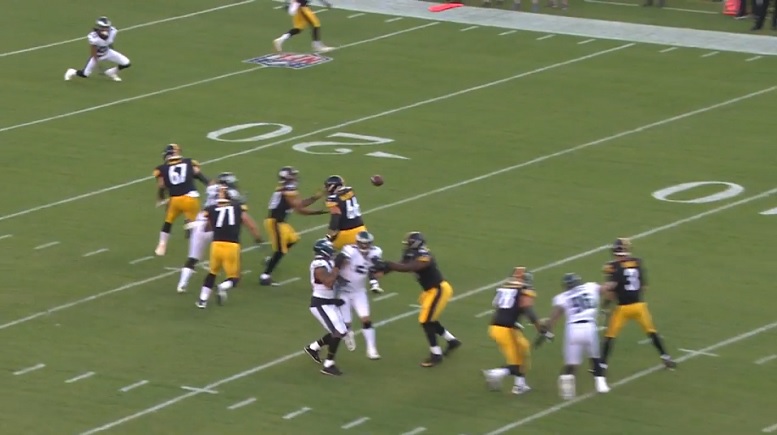 The Pittsburgh Steelers will have most of their starters on display in their annual tune up preseason game Saturday at Heinz Field against the Tennessee Titans and while running back Le’Veon Bell obviously won’t play in that contest, his absence once again should provide the team yet another great opportunity to take a long look at his backup, James Conner, and perhaps even some in the passing game as well.

Conner, who so far has rushed for 82 yards and a touchdown on 9 total carries during the preseason, has only caught one pass for 9 yards in the first two exhibition contests. Last season, the University of Pittsburgh product failed to catch any passes out of the backfield in his very limited playing time. Additionally, during his college career he only caught 30 total passes for 412 yards and 4 touchdowns. However, it’s worth noting that 21 of those receptions came during his final 2016 season at Pittsburgh and 4 of those resulted in gains of 25 yards or more.

In short, it would be nice to see the Steelers use Conner more in the passing game out of the backfield Saturday against the Titans and he said recently during an interview with the media that he’ll be up for that challenge if given the opportunity to do so.

“I feel like I’m capable,” Conner said when asked how he feels about his ability to make plays as a pass catcher and out in more open space. “Looking forward to some opportunities to show that I can make plays in the passing game and open space but just got to take advantage of the opportunity when it comes.”

James Conner hopes that his most recent performance will lead to bigger things this season. pic.twitter.com/vhEpNzknnb

Being part of the Steelers passing game also includes functioning as an effective pass protector which is another phase of Conner’s overall game he’s yet to master. Because of that, it will be interesting to see if he’s given a few opportunities to pass protect Saturday against the Titans and especially while starting quarterback Ben Roethlisberger is in the game.

One thing that we know Conner has already shown he can do at the NFL level is power run and that includes him breaking tackles. He’s done that a few times already this preseason and he’s confident in his ability to continue doing so.

“That’s my running style,” Conner said during his most-recent interview when asked if he feels stronger this year. “I feel like I’ve been breaking tackles for a while.”