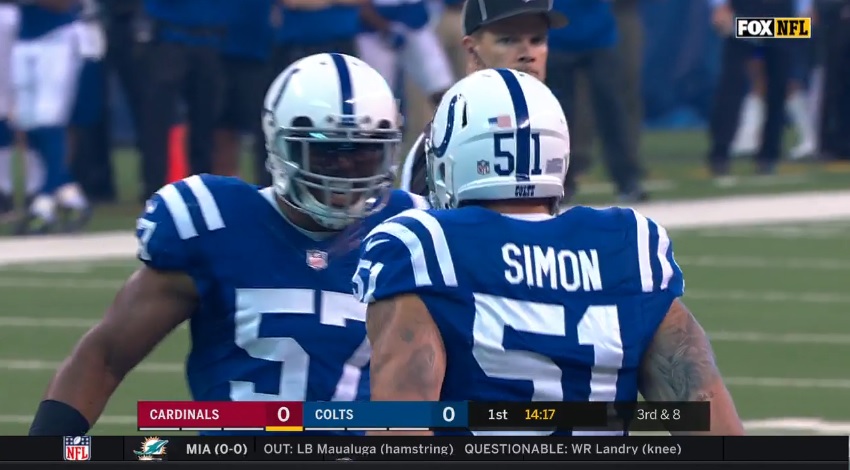 With two preseason games now remaining for the Pittsburgh Steelers, I’m curious as to how many of you feel right now about the team’s outside linebacker depth chart. Are you comfortable with the prospects of the Steelers entering the 2018 regular season with T.J. Watt, Bud Dupree, Anthony Chickillo, Keion Adams and Olasunkanmi Adeniyi potentially being this year’s group? If so, read no further.

If you chose to read on and you’re not completely comfortable with Steelers depth at the outside linebacker position right now then perhaps you would like to read an update on a player whose name Alex Kozora tossed around nearly a month ago that the team might should consider adding to the group in the coming weeks and one I’ve been on board with for quite a while as well.

The player Kozora suggested the Steelers should consider adding nearly a month ago is John Simon, currently of the Indianapolis Colts, and judging by how he was used by his team Monday night in their preseason game against the Baltimore Ravens, he can probably be had in the next few weeks via a trade.

Simon, who was drafted by the Ravens in the fourth-round of the 2013 NFL Draft out of Ohio State, is having to play defensive end with the Colts due to them shifting to a 4-3 defensive front this year. If you’ve followed the reports out of Indianapolis since Kozora first mentioned Simon just over a month ago, you probably know that they’ve been favorable ones. Additionally, Simon certainly received quite a bit of playing time Monday night against the Ravens on both defense and special teams and that surprised Stephen Holder, who covers the Colts for The Athletic as evidenced by a tweet of his that he posted during the fourth quarter of the contest.

John Simon is out here getting the undrafted rookie treatment. He's still in this game in the fourth quarter. Even covering kickoff. What the hell?

For whatever it’s worth, Simon is listed in the NFL gamebook from Monday night as playing 29 defensive snaps and 6 special teams snaps. He was credited with a sack and quarterback hurry against the Ravens and you can see a replay of the former below. He also played on both sides of the defensive line during that game.

Officially listed on the Colts website at 6-2, 260-pounds and going by how he’s been previously used by other teams since entering the NFL, Simon probably isn’t an ideal fit as 4-3 defensive end and one that plays every down with his hand on the ground. Instead, he’s probably best suited to play on his feet more like he did when he was with both the Ravens and Houston Texans.

The Steelers should already know quite a bit about Simon due to him playing his college football at Ohio State. Additionally, the Steelers brought Simon in for a pre-draft visit in 2013. While he certainly isn’t a player you would want starting 16 games, he still appears to be a more than adequate depth player and spot starter and one that can still contribute some on special teams. He’s also still under the age of 30 as he’ll turn 28 in October.

If the Colts are indeed shopping Simon right now, one small drawback when it comes to the Steelers potentially trading for him is the fact that he’s scheduled to earn a base salary in 2018 of $3 million and a roster bonus of $500,000. He also reportedly has a $1.5 million escalator in his contract for 2018 and 2019 that revolves around Pro Bowl honors, playing time and sacks.

As of the time of this post, the Steelers have $3,966,053 in available salary cap space, according to the latest NFLPA update. They, however, are sure to free up a little cap space in the coming weeks depending on which of the more experienced and above-average earning players are ultimately cut. The expected forthcoming contract extension for kicker Chris Boswell should also free up a little salary cap space as well. In short, they could make an addition of Simon work with his current contract if they really want it to and they could perhaps even perform a restructure with Simon similar to the one they did with now former Steelers safety J.J. Wilcox after they had acquired him via a trade just prior to the start of last season.

In lieu of trading for Simon, the Steelers could always stand pat and wait and see if the Colts ultimately part ways with the veteran edge-rusher and then attempt to sign him as a street free agent. Obviously, other teams might have interest in signing Simon for depth as well so if the Steelers really want him and the Colts are indeed willing to part ways with him, general manager Kevin Colbert should trade for him. That said, I’m not sure I’d give the Colts anything more than a sixth-round draft pick for Simon.

As I mentioned during the offseason, Colbert has a nice little recent history of adding players to the roster long after training camp has ended. Will he add another one or two again this year?

In closing, all of this slobbering that Kozora and I have down over Simon might ultimately be for naught. After all, it’s still totally unclear if the Colts are really looking to get rid of him and even if they are, the Steelers might not be interested in acquiring him. On paper, however, Simon ultimately landing in Pittsburgh would make sense so we’ll have to see how things transpire with his situation the remainder of the preseason.