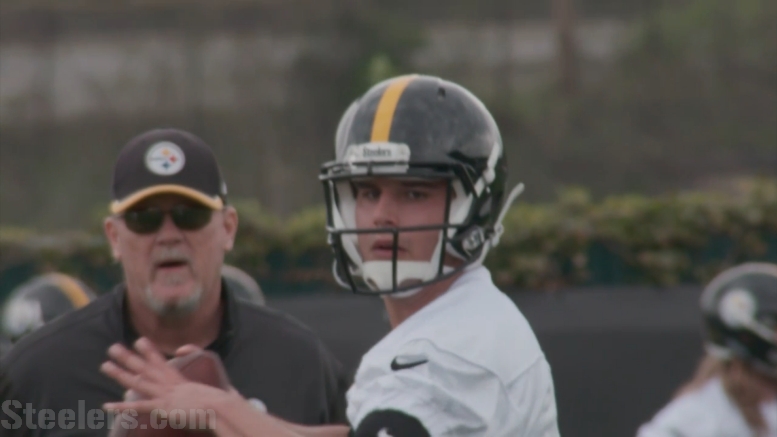 According to our very own Alex Kozora, Pittsburgh Steelers rookie quarterback Mason Rudolph has put together a nice string of training camp practices over the course of the last several days or so after having a seemingly challenging few of them upon arriving at Saint Vincent College in Latrobe and that certainly is encouraging news.

Ahead of the Steelers Friday night practice at Latrobe Memorial Stadium, general manager Kevin Colbert sat down for his annual interview with Pat Kirwan and Jim Miller of ‘Movin’ the Chains’ on SiriusXM NFL Radio and about midway through it he was told by the former that he believed Rudolph was further along than he thought he would originally be at this stage after watching him practice on Thursday. Colbert then agreed with Kirwan.

“In all honesty, Pat, probably than we did, too,” Colbert said. “Coming out of the college game, it’s always a challenge for the quarterbacks. It’s a lot different. They’re under center some more here than they had been in college. There’s probably more reads going on, less communication from the sideline and it’s more about what he’s reacting to and seeing. Jim [Miller], you know that, I mean, you came from a pro-style offense in college, but it was still an adjustment at this level and he seems to be very smart.”

Colbert then proceeded to highlight one particular quality that has evidently stuck out to him about Rudolph at this stage of his development.

“He’s got a nice natural feel in the pocket to move away from the traffic,” Colbert said of the Steelers first of two third-round draft picks this year. “He’ll never be a create, get yards running type, but you know, if you buy that extra split second, maybe gives that receiver that extra step.”

In an earlier interview with Mike Tomlin ahead of the team’s Friday night practice, Kirwan told the Steelers head coach that he thought Rudolph’s transition to the NFL game looks to be going well so far based on the one practice he was able to observe. Tomlin didn’t disagree with Kirwan’s assessment.

“I do as well,” Tomlin said. “And I think the fact that he’s a football junkie has aided in that. I don’t know that he’s defined by the scheme in which he played. I just think that he’s one of those kids that football is his job, his passion, his hobby, he loves it. You know, his behavior since we selected him has done nothing but confirm that and I think that those guys got a chance to adjust and evolve and it’s been fun watching his process thus far.”

So, how much of what Colbert and Tomlin said about Rudolph during their recent interviews with Kirwan and Miller was hyperbole and outright GM and coach speak? It’s hard to say for sure. With that disclaimer out of the way, Kozora’s recent post practice reports reflect that Rudolph seemingly has the proverbial arrow moving in the right direction.

If things go like I think they will Thursday night, Rudolph should get quite a bit of playing time in the Steelers preseason opener against the Philadelphia Eagles and especially if both Ben Roethlisberger and Landry Jones sit that entire contest out. Rudolph will likely follow fellow young quarterback Joshua Dobbs into the game whenever his planned playing time is over and hopefully it will amount to the Oklahoma State product playing a good portion of the second half.