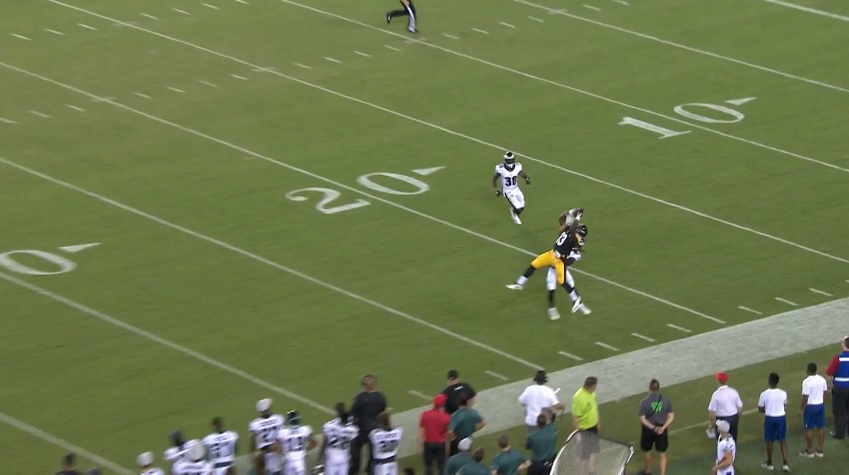 Damoun Patterson may have stolen the show last night but the reality is, he’s unlikely to contribute Week One against Cleveland. James Washington hopefully will and to a lesser degree, he had a good night, catching two passes for 44 yards. The biggest of the night, a 35 yard jump ball, came from Mason Rudolph. Washington said playing with Rudolph in college is making the transition easier for both of them.

“That goes back to 2014, the summer, when we first started working with each other,” Washington told reporters on Steelers.com. “All the way up until now. We have that chemistry where we know each other and know what we’re going to do on certain routes. I know how the ball is going to roll off his finger. It pays of.”

His big catch came off a free play, the Eagles jumping offsides. For many rookie QBs and WRs, there’s no understanding of what to do. Let the ref blow the whistle, take the free five yards. But Rudolph kept the play alive, feeling and fading away from pressure while Washington found the ball and made a terrific combative catch.

Though Washington didn’t work with Rudolph exclusively, there’s no doubt playing with #2 makes life a lot easier, especially in an NFL debut.

“I feel like it helps a lot,” Washington said about playing with Rudolph. “Because you have that person you know so well helping you throughout the process. We’re both rookies so we’re both going through the process. So we lean on each other.”

Watching it live, it felt like there was at least one error between the two. Rudolph took a sack on a play where he appeared to want Washington to run a slant, who never got his head around. So it wasn’t a perfect night for either of them but a good start. One they’ll look to build on moving forward.