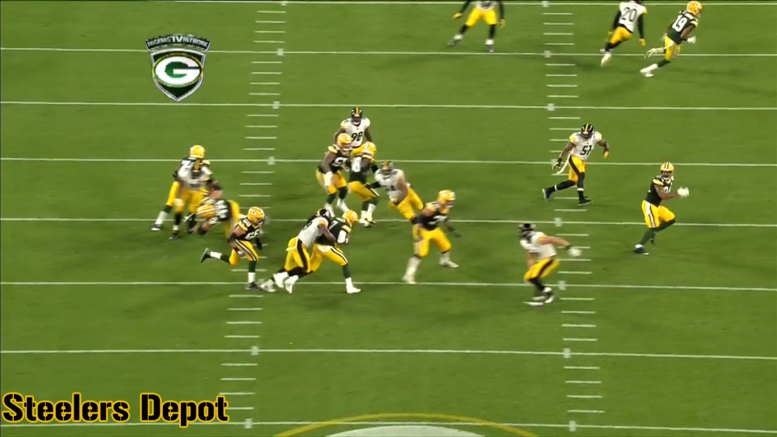 Bud Dupree may have only recorded one single statistic during his playing time last night, but it was a big one for him. The Pittsburgh Steelers’ fourth-year outside linebacker, playing his first snaps after having moved from the left side to the right side, recorded a sack early in the second quarter, one of three sacks on the night for the defense but the only one that was really challenging.

With the Green Bay Packers facing a third and 10 from the Steelers’ 26-yard line, Dupree came from off the right side of the defense, using his inside arm to gain a pivot point against the left tackle and proceeding to rush his way through the pocket, bringing down Brett Hundley for a nine-yard loss.

It was a quality play that nearly knocked the Packers out of field goal range—they went for and made a 50-yarder—even if it was not a sack of the greatest degree of difficulty, and coming against a backup. Still, you can only beat the man in front of you.

And it was the first taste of the fruits of his labors after having swapped sides. After the game, he was asked about how it differed from playing on the left side.

“Coming from the [right] side, it’s small things”, he said. “Using different hands, your inside hand, instead of using my right hand I use my left hand for my inside move. Seeing stuff from my left instead of my right. But at the end of the day you’re still playing football”.

Dupree also said that “it’s set in stone now”, seemingly referring to the move the team made in flipping their outside linebackers. But through two preseason games so far, they have only gotten one of them on the field one time. T.J. Watt has missed the first two games due to injury, while Dupree missed the first with a concussion.

The fourth-year player also got pressure on Hundley a few plays earlier on that drive on second and four near midfield, in fact even contacting the quarterback just after he released the ball, but he was able to get the pass off cleanly, hitting his receiver for a nice chunk on a catch-and-run slant pattern working against Artie Burns effectively in the slot after they motioned the tight end out wide.

Dupree recorded a few pressures throughout the game, a decent start, especially considering that he only got one practice session in before playing after missing the past couple of weeks. He missed most of training camp and has not gotten much work in pads coming off the right side.

The bigger test will be the next game, which he should log a significant amount of playing time, and before which he should get in plenty of practice time. But ultimately it’s hard to be disappointed in his first showing in this context.