The majority consensus was that Pittsburgh Steelers quarterback Ben Roethlisberger looked pretty sharp last night and was able to knock off the rust, but the veteran expressed disappointment in his performance after the game and said that he wished he could have knocked off a little more of that proverbial rust.

While he did complete 11 of 18 passes, one of which was dropped, and threw for 114 yards and one touchdown, there were several passes that he wished he could have gotten back, especially earlier on, but even on his penultimate throw of the night through three drives.

“I wasn’t real happy with the way I threw the ball tonight. I was kind of sailing some passes”, he told reporters. When asked why that was, he said that he was probably “just anxious, and [having] a real rush coming at you. Not getting the ball high enough on my release”.

He was strong all night pretty much except for two key areas: vertical passes and targeting Jesse James. While he finished his showing with a 32-yard touchdown to Justin Hunter on a deep ball, he threw a few other deep passes out of bounds. And every target he threw to James was off the mark, which was his biggest regret.

“I was most disappointed about throwing to him. We’ve had some good connections in the past. It’s on me”, the veteran quarterback said. “He was in the right spots, I just was sailing them a little bit. It’s one of those things where you see a big target and you kind of want to relax and don’t think about the pinpoint accuracy, but I need to do that, and I hate that he got hit because of a pass I threw tonight”. 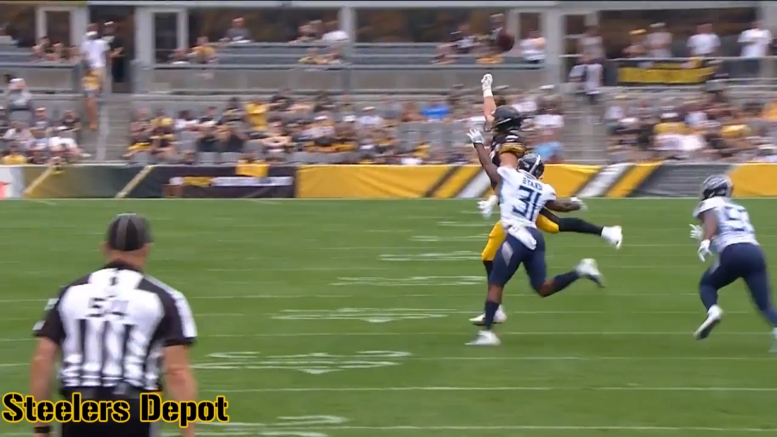 The one time that the pair did connect on the night, it was on another high pass, and as Roethlisberger mentioned, James was injured on the play. the tall tight end went up to grab the pass, but as he was coming down with the ball, a defender cut him down from underneath and he landed hard on his back. The team did not have an update on his status in terms of future availability.

“I wasn’t super happy about how I delivered it tonight”, the quarterback continued to offer in answer to another question later on in the interview after crediting his offensive line for allowing him to play as well as he had.

For the first time all preseason, the Steelers fielded almost their entire offensive line, short Ramon Foster at left guard, who is still working his way back from an early training camp ankle injury. Maurkice Pouncey did participate for the first time, the team holding him out the first two games.

It’s easy to be critical of a player as great as Roethlisberger is on the field, though, simply because he does so many things well. It has a way of amplifying the negatives. He knows as well as anybody the throws that he missed on the night and nobody is more disappointed in them than he is.