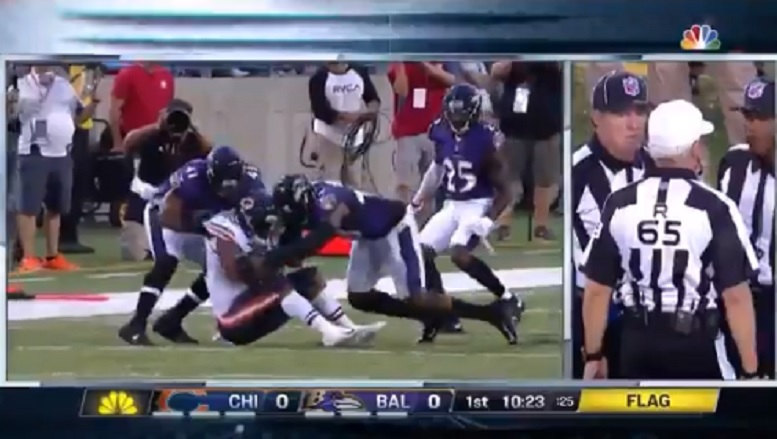 Did you watch the annual Hall of Fame game Thursday night between the Chicago Bears and Baltimore Ravens? If so, what did you think about the two lowering of the helmet penalties that were called during that contest? That new rule change is obviously going to receive quite a bit of attention during the preseason and because of that, we’re sure to be discussing a few more penalties related to those types of hits between now and the start of the regular season.

In case you’re curious, Pittsburgh Steelers team president Art Rooney II said over the weekend during an interview with Pat Kirwan and Jim Miller of ‘Movin’ the Chains’ on SiriusXM NFL Radio that he indeed watched the game between the Bears and Ravens Thursday night. He then proceeded to give his thoughts on the first of two lowering of the helmet penalties that were called during the contest and how he expects such calls to progress moving forward through the preseason and into the regular season.

First look at the new helmet rule in a game. #HOFGame pic.twitter.com/wxejQTXIMu

“I watched last night as well and I thought the first one was what the call should be,” Rooney said in referencing the lowering the helmet penalty that was called early in the first quarter of Thursday’s game on Ravens linebacker Patrick Onwuasor. “I mean, we’re just trying to eliminate the helmet as a weapon and I think it can be done without really changing the game dramatically. As far as I’m concerned, we shouldn’t be seeing three or four calls a game, we should be seeing a few calls a weekend and that’s about it. And I think that if we’re smart about it and the officials, there’s some adjustment period, it’s going to take time for everybody to adjust to it and really figure out how it’s gonna work.

“I know the players are wanting a lot of input and so the preseason is going to be interesting. But I think that it is something that can be done without having a dramatic effect on the game and at the same time getting out the kinds of hits that you don’t want to see in the game.”

Some of the fear associated with new lowering of the helmet rule revolves around players possibly being ejected. However, Rooney does see such ejections becoming rampant, at least that’s what he’s hoping for.

“Look, I do think that the calls on the field should be reserved for really the obvious fouls,” Rooney told Kirwan and Miller Friday night. “I think if it’s a close call, I would hope they let it go and let it go to New York and if it requires a fine or suspension after the game, you know, that’s a different story. And I think that teams can adjust to that, but when you have a foul during the game, or somebody that’s thrown out of the game, that’s tough on the game and tough on the teams.”

For whatever it’s worth, Al Riveron, the league’s head of officiating, attempted to qualm fears earlier in the offseason when it comes to the new rule possibly resulting in “an ejection fest” every week.

“Immediately when I learn in New York that there’s an ejection, I will ask the network to give me everything you’ve got,” Riveron said a few months ago, according to the Associated Press. ”I will take a look at it, I will rule on it and I will say yes, he’s ejected, (or) no, leave him in the game.

”Play will stop, and we will expedite it. That’s why we won’t have the referee come over and we’re not going to get the replay official involved,” Riveron said. ”The only way the replay official will be involved is he will call it and immediately tell the command center, we have an ejection on `No. 22 White.”’

Riveron’s disclaimer aside, Rooney said Friday night during his interview that he’s somewhat resigned to the fact that a few ejections will ultimately occur.

“And look, there’s going to be some cases where that’s going to have to happen, but I do think just looking at some of the tape we’ve looked at over the last few months, it’s really a relatively small number of plays that we’re talking about,” he said.