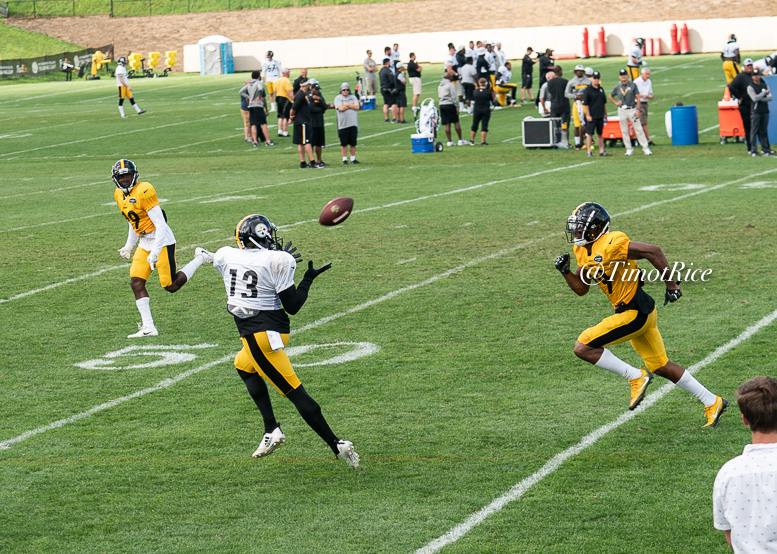 It’s Day Eight of the 2018 Pittsburgh Steelers training camp. And oh boy, it’s a biggie. Friday Night Lights, the team taking the bus to Latrobe High School right in the heart of downtown. A city that is barely equipped to handle the scores of people that attend for the practice and post-practice fireworks show. So if you’re attending, get there early. And remember it’s $5 to get through the gate.

Here’s what I’m looking for.

– I think Ben Roethlisberger is going to take this one off. Half-day today so an off day should be next and according to my notes, he hasn’t worked in this practice the last two years. So expect Landry Jones, Josh Dobbs, and Mason Rudolph to shoulder the load. Up-and-down practices for Mr. Dobbs. Wednesday was his best one, Thursday his worst. Let’s hope today is more of the first one.

Rudolph under the lights. Probably will feel a little more pressure than usual in a new environment and his routine being broken up after just settling into Latrobe. Let’s see how he responds to playing in different conditions.

– The second and last installment of backs on ‘backers and I’ll do my darndest to be able to watch that group after not paying as much attention to them back on Day Three. Reports had Jaylen Samuels struggling, which you’d expect for a guy who hadn’t done it since 2015,

The live session is as intense as it gets. Looking for these guys to run hard, low pad level, and finish each carry. Jarvion Franklin showed some juice to the sidelines while also getting work at fullback (which didn’t go so well, no shock there). I’d love to see Stevan Ridley get some extra reps too.

– Someone show me something. Jesse James is doing his thing and Xavier Grimble will occasionally wake this group out of a slumber but that’s about it as long as Vance McDonald is out. Bucky Hodges’ head is still spinning and Pharoah McKever looks as raw as he was billed to be coming out of NC State. They have a bunch of dudes who don’t have much experience with the team, in the league, and at the position. Let me give you my Achilles, Jake McGee. You need it more than my blogging body.

– Gotta see Damoun Patterson break out of this mini-funk he’s in with would-be touchdown drops the last two days. Fast start, maybe the heat and grind of camp is getting to him. No question he’s facing a lot of pressure.

One thing this whole group will adjust to is finding the football at sunset and under the lights. A little different than a 2:55 practice. Who can go grab it vertically?

If Patterson continues to struggle, you have Justin Thomas chomping at the bit to take advantage of the opportunity. Also, Quadree Henderson only has one catch in team sessions. Let’s double that number today, ok?

Honestly, I know they’re backup receivers, but this group doesn’t have many catches. Tevin Jones only three or four. Thomas two or three. Trey Griffey with five or six. Want to see this whole unit rise to the occasion.

– Of course, monitoring Alejandro Villanueva’s shoulder/bicep injury. But I think it’s minor even if he does sit out. Seeing a lot of moving and shaking with this group. Matt Feiler and Parker Collins have taken team reps at three different offensive line spots. Feiler has been at both left/right guard and right tackle. Collins has played all three interior spots. Patrick Morris coming off a good day and elevating to 2nd team center. More reps for him. Larson Graham initially jumped to 2nd team but yesterday, I saw him only as the third team center. Not the best news for him.

Last thing. In this practice last year, B.J. Finney got destroyed. Let’s hope for a better result this time around. Cam Heyward and Javon Hargrave are pretty good at messing him up.

– Tomlin praised the interior offensive line yesterday, a shot to the defensive line to step things up. But I still think overall, they’ve done a nice job stuffing the run. Who is going to show something as a pass rusher? Continuing to keep a close eye on Daniel McCullers, making a case to stick on the 53.

Greg Gilmore has been…invisible. My camp darling no longer.

– Keion Adams coming off a nice day. Want to see Ola Adeniyi show up in my notes. Haven’t noticed him a ton since he returned from injury. Time for this guys to feast on some deer in the headlights backs and tight ends. Expectations high for this unit.

– Definitely not a group with a ton of name value league wide but they’re feeding off each other and raising their play. Hard to see any of these guys have had a truly bad camp. Searching for a Tyler Matakevich or Jon Bostic to make some plays in coverage. Both have been average there and even beaten pretty good by Jesse James. Matakevich two days ago, Bostic yesterday.

– Artie Burns had an excellent camp last year so him repeating that isn’t a shock. Nor does it mean 2018 is going to be a great year. But it sure beats lowlights. Brian Allen is coming along nicely while Coty Sensabaugh has shown the ability to recover and play with good technique.

– Hoping Sean Davis and/or Morgan Burnett can jump back into team drills. Don’t get how Burnett can be in pads back-to-back days and not even work one-on-one or 7v7. But I understand they’re being cautious to a guy who is going to be valuable to this defense in 2018. Still, with them out, more reps for Terrell Edmunds – who’s been impressive – and Jordan Dangerfield, who stacked two solid outings.

– Usually get a solid ST session during this practice too. Hopefully can report a little more on that than I have. I’ve seen Matt Wile boom punts. Haven’t seen him get works on kicks yet.