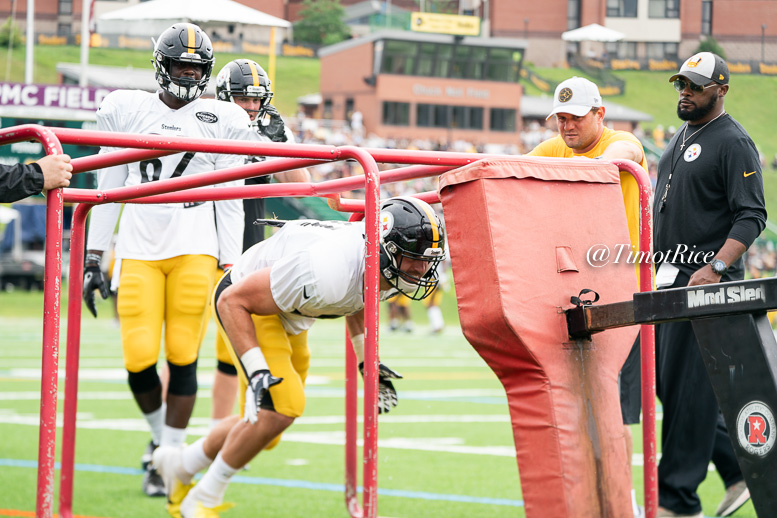 For the rest of the preseason, we’ll give a recap, position-by-position, player-by-player of what I saw during the 2018 Pittsburgh Steelers training camp and preseason games. Moving onto tight ends, the Steelers version of positional Ambien.

Jesse James: I love you, Jesse James. You don’t appreciate a competent, reliable tight end until all the other ones are hurt. He’s no Heath Miller but they’re cut from a similar cloth. Salt-of-the-earth type players who won’t wow you, but well-rounded, trustworthy, and available. James has missed only two career practices, only one of those due to injury, entering Year #4. James’ camp was objectively fine, catching short throws over the middle and occasionally a longer look downfield, but you have to tip your hat to a guy who is there to work every day. That means battling through some injuries, as he did last year.

Xavier Grimble: Ugh, I want to be an Xavier Grimble fan. A big one. There’s a ton of talent there and you see just enough of it to keep him around hoping for more. But Grimble caught only 9 passes in team drills and none in the only preseason game he played before suffering a right thumb/hand injury that’s reportedly required surgery. That’s likely to knock him out of the rest of the preseason. His blocking improved last year and carried over into camp and he can make plays vertically. But it’s maddeningly inconsistent. If you want a surprise cut, this could be the guy, if the Steelers find something on the waiver wire.

Pharoah McKever: Now we get to the “other” group of tight ends. It’s understandable this group has their struggles given the raw nature of guys like McKever, a UDFA who bounced around positions in college and frankly, didn’t play much until 2017 at FIU. There’s something there as a receiver, his body control and ability to catch outside his frame is impressive. But he’s not a very fluid player and a terrible blocker, his height working against him in both aspects. He’s a seam threat and right now that’s all he is. Some practice squad potential but if they don’t keep him around, I won’t lose sleep over it.

Bucky Hodges: Hodges was a mid-camp add, just as Jake McGee was in 2017, following Ryan Malleck’s injury that got him waived. Hodges is similar to McKever. Not a blocker, unless he’s using his size to get in the way on a pulling, kickout block, but an athletic player who can pose matchup problems on LBs. He came in and caught nine passes, the same number of Grimble. Still, a raw player trying to get on the moving train after being added well after camp began. Equal odds they keep him, McKever, or neither. I don’t have a good feel for it. That 4th preseason game will be huge.

Christian Scotland-Williamson: The good news is there’s a practice squad exemption for him this year. He looks every bit of a rugby player. I’ll give him the boilerplate credit of being available for every practice, surviving his first NFL camp with that rugby toughness. His size alone allows him to get a decent-enough push as a blocker, you see it on the sleds, but he had trouble keeping his eye level up and getting overextending. CSW has been virtually invisible as a receiver. By my count, he had only three catches across 15 practices and only one in the first two games. I think they’ve all been dumpoffs into the flats. Kinda hard to participate that much and produce so little.

But again, I don’t want to be needlessly harsh on those guys. You know the tough spot they’re in. Excited to see what progress he’ll make next year.

Vance McDonald: Welp, it was fun while it lasted. McDonald lasted 2 1/2 practices before suffering a still unknown foot injury. Mike Tomlin has categorized it as minor and McDonald looks fine on the practice field, walking without a boot or limp. But today marks 22 days since his last practice so consider me skeptical of this being truly a short-term issue. McDonald’s size and athleticism can clearly be a huge factor in this offense and Randy Fichtner split him out wide as much as he had him in-line when McDonald was available. If he’s healthy, I’ve used that phrase so much I’m requiring it will be carved into my tombstone, he can be an asset. But the health, obviously, is a major question mark.

Can’t give this a good enough grade for 2.5 days of work, especially when those first two practices came in shells.