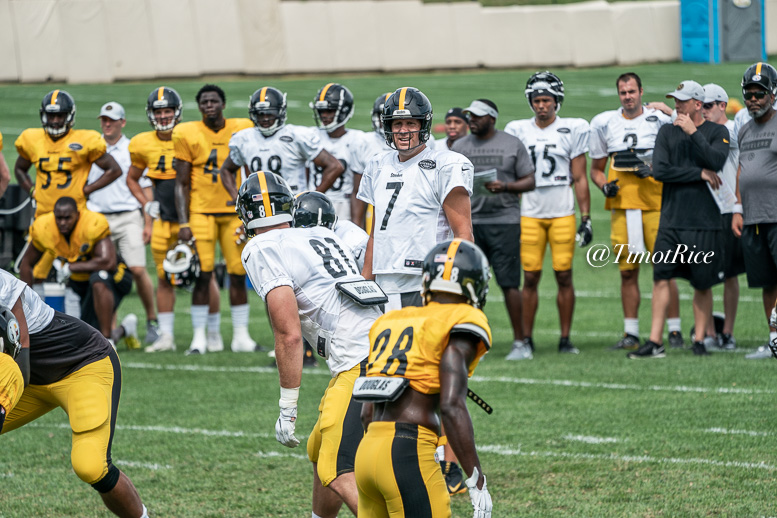 Put a bow on the 2018 Pittsburgh Steelers training camp. We’ve gone through 15 exciting practices and like every year, there’s a mountain of information for us to get through. Let’s recap the good, the bad, and ugly from what I witnessed.

Mason Rudolph’s Poise: It wasn’t always a perfect camp, especially at the beginning, but what was interesting about him that, as a rookie, the moment rarely seemed too big for him. He commanded the huddle, rarely had to reset the play, and aside from a couple bad snaps with Maurkice Pouncey – who he rarely worked with – was clean with the football. He wasn’t a Captain Checkdown, he pushed it downfield, showing enough velocity and impressive touch. Led both of his two minute drills for touchdowns. And had a nice debut against the Philadelphia Eagles, playing on the road under the lights for the first time. Confident but not arrogant.

Damoun Patterson’s Mental Toughness: Talked about it last night on the Terrible Podcast. Plenty to be impressed about with Patterson’s game; body control, vertical ability, and all that, but I loved his mental toughness. Strong start to camp and then caught 4 of his next 15 passes with two ugly drops. Gets into a stadium and balls out. Then finished camp on a good note. Impressive to see that sort of toughness and ability to finish things out strong. Excited to watch him going forward.

Outside Linebacker Depth: Feel a little bit better about this group a couple weeks into the season. Keion Adams was solid and seemed to play the run better as practices went on. Quick, violent hands and a good athlete who stays clean as a pass rusher. Ola Adeniyi was obviously a nice surprise but the total opposite of Adams; stocky, powerful, not a tremendous athlete but a straight-line guy whose height is a problem for much taller tackles.

Rookie Class: Across the board, it was a solid showing. Some of the early reports on Terrell Edmunds were a tad bit overstated, he wasn’t always flashy in team drills, though a lot of that is common for a safety, but definitely got things off on the right foot. Safety who can move and cover like a corner. James Washington was on fire the last half of practices, catching every 50/50 ball imaginable. Chukwuma Okorafor got better, we talked about Rudolph, and Jaylen Samuels showcased his versatility. No rookie look totally overmatched and that’s great to see, even if it’s unlikely they all make it. Marcus Allen and Joshua Frazier most likely to get cut.

Opportunistic Defense: I can’t tell you with certainty how much it matters but this is a defense that picked off 20 passes in camp. Maybe that has something to do with facing two young QBs but then again, they normally would in any camp, the #3 and #4, and usually one of them is a lowly UDFA who doesn’t have a shot to stick. Not the case this year. Credit some scheme changes, coaching changes, and just adding more talent. Either way, I’m happy. Still have to tally the last several practices up but believe Artie Burns led everyone with I believe four interceptions. I’ll have those numbers for you soon.

Inside Linebackers: In a vacuum, I don’t think Tyler Matakevich or Jon Bostic had terrible camps. Matakevich was always around the ball in run sessions, Bostic a vocal player and clearly, a competent communicator. But it’s still hard to feel confident about this group going forward, especially in coverage, and based on what we saw last Thursday. Collectively, I can remember them making one play moving backwards across 15 practices (a Bostic breakup a couple practices ago down the seam). More often than not, they were beat. Bostic is your likely starter though I won’t say he’s “won” the job just yet but all the concerns fans had about this group are real. And (un)spectacular.

Tight Ends: It’s hard to say expectations were high beyond the top three. But even then, Vance McDonald apparently has gangrene in his foot (that’s a joke…I hope), and Xavier Grimble did his Haley’s Comet impression; showed up once every 70 years. Beyond that was a struggle to watch. Pharoah McKever and Bucky Hodges are big receivers who can flash vertical but that’s about it while Christian Scotland-Williamson was super quiet and didn’t play well against the Eagles (missed run assignment on failed 3rd and 1 + a false start). Thank God for Jesse James. The only dude in that room you can count on. One missed training camp practice in four years, participating in 61 of 62. Can’t say enough about that.

The Returners: Looking at you Quadree Henderson and Justin Thomas. Thomas played more WR than Henderson and had a decent final practice but was quiet throughout and struggled during the game. Henderson barely saw any snaps at WR over all 15 practices. If I had to guess, probably played 20 snaps there. He’s a pure returner and we saw how hard it is for him to even try to make a play during a game. Only one return, the opening kickoff, and that was it. Tough sledding for return men coming out. I’m with David Todd. I don’t know Henderson’s whole situation that led him to declare early but I don’t think an $8000 signing bonus justifies likely getting cut without a second thought.

Tight Ends On The Sleds: I know I wrote about the tight ends earlier but I have to put this into its own category. Exclude Grimble from it because his blocking has really developed. But all the young, raw players: McKever, Hodges, CSW. The sleds were their worst enemy. TE coach James Daniel made this guys rep it over and over again. They got better but it was a low bar to clear.

Reserve DL Snap Counts: Gotta feel bad for guys like Parker Cothren and Greg Gilmore. They have to earn it, of course, to move up the ladder, but two guys who just didn’t really play. Thought Gilmore would turn into a sleeper. Instead, he’s a dud. And the team gave him a sizable $15,000 signing bonus too.

DHB Catching The Ball: I guess it gets the job done but it’s not pretty. Everything a body catch. Think the team has sorta just accepted that fact at this point. Darryl Drake doesn’t care about how you catch the ball. For DHB, that’s a good thing.

People Mad At JuJu: Possibly the dumbest storyline of training camp (and it had plenty of competition). One bad practice, while dealing with a knee injury, turned into the “millennials are ruining training camp” op-eds. It was dumb, always dumb, and JuJu caught a 71 yard TD pass in game and finished camp on a high note.