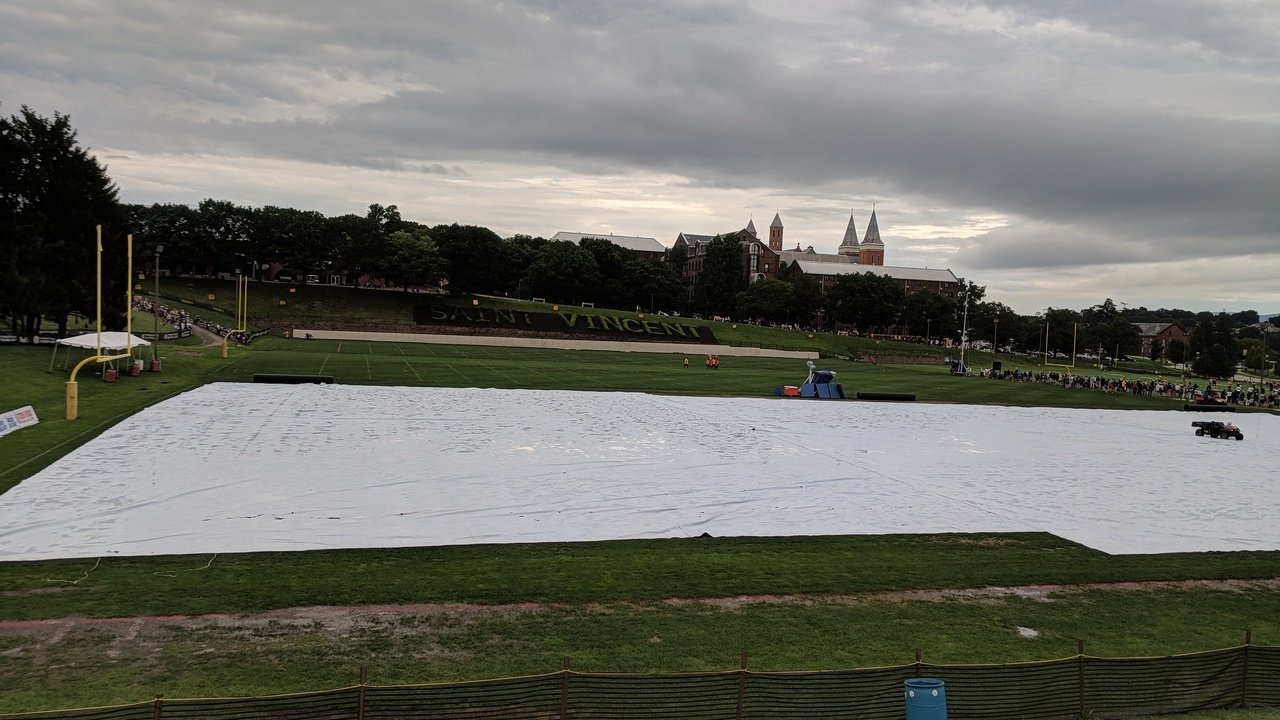 A very wet, delayed day at St. Vincent College. Severe weather forced the Pittsburgh Steelers practice to begin an hour late, at 2:55, and the team spent the session solely on the turf field. No tackling today either, the team still in shorts and shells. Final one tomorrow.

– Injury report: Lot of names being held out today, though again, caution a lot of this is minor. With a game upcoming, the team won’t take many chances. Held Keion Adams and Brian Allen out before the Eagles game and they ended up playing.

Antonio Brown only went through individuals. He’s fine by the way, as Dave Bryan wrote earlier this afternoon. Foster was on the field and didn’t have a brace on his injured right knee so that’s a great sign for his progress. With Chick, Watt, and Dupree out, the team had only 3 OLBs practicing today. B.J. Finney went full today.

The OL was interesting today. Here was the first team group: Villanueva-Feiler-Pouncey-DeCastro-Gilbert

Finney got work with the 1st team when Pouncey was rotated out for a couple of the team sessions. But a little curious why he didn’t run with the starters at the LG spot. Maybe they just didn’t feel the need to overwork Finney by giving him that many reps. We’ll check it out one final time tomorrow.

– Very low key of practice today. Not much one on one work with everybody working on the same field. This isn’t every rep but a couple of the one-on-ones WR vs DBs. Situational football focused today too, working on goal line/end zone routes.

1. Justin Hunter runs a post but the pass is incomplete. Artie Burns covering.

2. Nifty double-move by Quadree Henderson to beat Brian Allen clean for a score left side.

3. Justin Thomas on a post. Coty Sensabaugh outside leverage and can’t do much about it. Touchdown.

5. Burns drops an INT on a throw for James Washington.

6. Thomas runs a comeback and shields himself from Phillips.

7. Washington bursts away from Malik Reaves on a slant. TD.

8. Henderson runs an out, getting space from Allen. Pass complete.

1. I’ll be honest here. My vantage point for this session wasn’t great. Not sure on some of these completions if they crossed the goal line or not. I’ll update later. Steelers.com usually has a solid wrap up of things.

Feiler in at LG. Javon Hargrave back with the first-team today at the nose. Keion Adams LOLB, Farrington Huguenin ROLB. Landry Jones in at QB, falling away but connecting with Hunter over the middle, working away from Burns. Definite TD.

2. Base defense, Heyward standing up at the LOLB spot like we’ve occasionally see him do in games. Jones complete right side for Jaylen Samuels against Morgan Burnett. Around the goal line. Too tough for me to tell if it crossed the chalk or not. Reading over the team site’s notes, this was a score.

3. Quick out from Jones to Marcus Tucker for a TD.

4. Jones connects with Bucky Hodges on a three step drop. Empty set, Samuels split left with Vince Williams walking out to cover him. Steelers.com says this wasn’t a score.

6. Backshoulder throw by Rudolph to Patterson left side. Behind and incomplete. Sensabaugh covering again.

7. Good placement on the throw from Rudolph to Samuels left side. Matthew Thomas couldn’t rip the ball out. Offense wins the day 5-2.

1. Justin Hunter and Darrius Heyward-Bey the two WRs in the game. Fitzgerald Toussaint up the middle. Hargrave on the stop. Jon Bostic and Vince Williams the starting pair at ILB.

2. Finney in at center for Pouncey with the 1’s. Toussaint bounces his run to the right side. Haden comes in to stop him up. No tackling today.

4. Matthew Thomas soaking up more reps at ROLB with all the injuries there. Samuels totes the ball left side. Cam Heyward penetrates. Samuels through the hole before Burnett tags him.

6. Adams and Ola Adeniyi at OLB. Jarvion Franklin counter right. Matakevich and Thomas the ILB pairing. Thomas comes in backside for the stop.

7. Franklin left side. Thomas and Big Dan McCullers there for the stop.

8. Josh Dobbs boot right. Pump fake to get Huguenin to jump and create some space. Dobbs runs out of bounds right sideline for a short gain.

9. Joshua Frazier and Lavon Hoooks the nickel DL. James Summers with a rare carry, showing good burst and vision to put his foot in the ground and get upfield.

10. First time I spotted seeing Omoile and Banner getting reps on the right side. Samuels carry over left guard. Thomas first man there while Hooks wraps the back up.

12. Hilton and Nat Berhe the S pairing. Joseph Cheek, a penalty machine in these practices, false starts. Summers carry left side off the tackle’s hip. Matakevich there again for the biggest “hit” of the day, bumping the back as Summers spins to the inside.

1. Mason Rudolph working with the 1’s, though without Antonio Brown, JuJu Smith-Schuster, Vance McDonald…the gang isn’t all there. Throw is behind Justin Hunter, incomplete.

4. Rudolph heaves right sideline for Patterson. Haden, in the end zone, picks it off. And in a veteran moment, takes a knee for the “touchback.”

5. Working on his third read, he hits Patterson on a crosser left to right. Pass through the rookie’s hands, sloshing along the ground behind him. Incomplete.

6. Low snap. Fade, 50/50 ball for Washington right side. Leaps over Brian Allen’s head and plucks it for the score. Impressive play. Corners might be getting frustrated with this #13 dude. Allen jumped up and down after allowing the TD, mad at himself.

7. Vince Williams applies some pressure to Josh Dobbs. Connects to Tevin Jones in the right flat.

8. Quick out to Trey Griffey right side. Thrown to outside shoulder away from the defender. Griffey reaches out, falling for it, but incomplete. L.J. Fort covering.

9. Dobbs fires it back right pylon. Too far in front for Quadree Henderson. Jake Rodgers sealed Kendal Vickers upfield from his RT spot.

10. Dobbs throw again not close, this time to the left side. Intended for Justin Thomas.

11. Option play, Dobbs keeping it and crossing the goal line left side.

12. Option again…for reasons. Dobbs takes it out of the belly of the back and beats Fort to the left side.

1. Finney in at center for Pouncey. Dobbs playaction. Looks for Hodges down the right seam. Too high, too far in front, and it clips off the diving Terrell Edmunds’ fingertips. Rolls into the end zone. Mike Hilton, not participating on this play, grabs the football and “pretends” to throw it back at Edmunds’ face, still laying on the ground.

2. Some sort of jet sweep/toss left side to Samuels, motioning from his WR spot to the backfield. Dobbs pitches him the ball and then spins to the right as a decoy. Samuels carry up the middle.

3. Designed run by Dobbs on a boot/waggle to the right.

4. Empty set. Hargrave pressures Dobbs, who is forced to fire it short. Morgan Burnett on the spot, stepping in front of the receiver (don’t know who it was) to pick it off. Would-be pick six the other way.

5. Fade to Washington right corner. Rookie does it again, skying up over Haden and bringing the football in. Does this every single practice.

6. Nice backshoulder adjustment complete to Tucker, now working over Haden. Throw from Dobbs, hitting the WR on the right side.

7. Rudolph now in and climbs the pocket. Checkdown over center to hit Franklin with Matakevich draped all over him.

9. Nowhere to go for Franklin right side. Josh Frazier makes a nice play and is in on the “tackle.”

10. Rudolph connects with Griffey right score for the score.

11. Fade right side over the outstretched hands of Hodges, who couldn’t complete the catch. Walking back to the huddle, he and Rudolph have a brief conversation.

1. Walton-Hargrave-Heyward the DL. Toussaint counter to the right. Vince Williams forces the back inside to his help.

3. Toussaint left side. Stuffed at the LOS.

4. Draw to Samuels. Williams blows it up.

5. Adams/Huguenin the OLBs. Movement from the interior OL before Dobbs wants it, still getting everyone else set. A little obvious frustration from him, rare to see, at his line. Patrick Morris the man at center. Reset and Dobbs throws Washington open to the inside, stretching out his hands to make a nice catch away from his body against Burns.

6. Samuels right side. Good run defense by Keion Adams, occupying two blockers (one of them was Roosevelt Nix) to string the ball out and have it go nowhere.

7. Good throw and catch deep down the right sideline. Rudolph rainbow shot to Trey Griffey, making the grab between Malik Golden and Brian Allen. Of course, no tackling here helps this completion. TD.

8. Rudolph tries it again, this time heaving left side for Justin Thomas, 1v1 against Sensabaugh. Thomas can’t find the ball and it’s incomplete.

9. Franklin up the middle. McCullers sheds R.J. Prince’s block and stops the back near the LOS.

10. Far sideline throw to Trey Griffey from Rudolph. Holds on as Sensabaugh is unable to punch it out.

– Saw Brian Allen and Jarvion Franklin with some slight limps at the end of plays the latter half of practice. Both seemed fine and finished out the day but something to just keep in the back of your head for tomorrow.

– Fitz Toussaint (your favorite), Quadree Henderson, and Justin Thomas getting work on kick return team. Nix and Samuels were back with Toussaint as the new “back three.”

– Even on a rainy kinda “blah” day, L.J. Fort and Tyler Matakevich getting work after practice. Working on their drops and catching passes. Zach Banner, looking to get into “football” shape with this being his first camp action, shed his equipment and ran some sprints.

– No podcast tonight. Long day getting rained on and I have a couple other articles and work I want to get done for the site. On the show, we’ll wrap it all up tomorrow evening. So stay tuned for that.

– Sounding like a broken record (sorry!) but with the practices so light, we haven’t learned a ton, especially about some of the trench guys.

– Josh Dobbs still spotty in practice. Work to do. Don’t understand these designed runs either.

– A better day today for RB James Summers, I guess.

– All James Washington does is make tough, contested catches.

– Hargrave back with the 1’s. Mentioned it earlier but want to repeat myself for anyone skimming. McCullers in his normal backup spot.

– Vince Williams with a nice practice, not that anyone was really worried about him. But my meaningless gold star goes to him.

– A whopping 19 INTs for the defense this camp. In the 5 years covering them, they’ve never picked off this many. Previous record was 17. Artie Burns has four. Not sure about the rest. Kevin Fogg the single-camp record holder (in my time) with five.

Not a very pretty day. So here’s a photo of me looking out the McLumina waiting for practice. 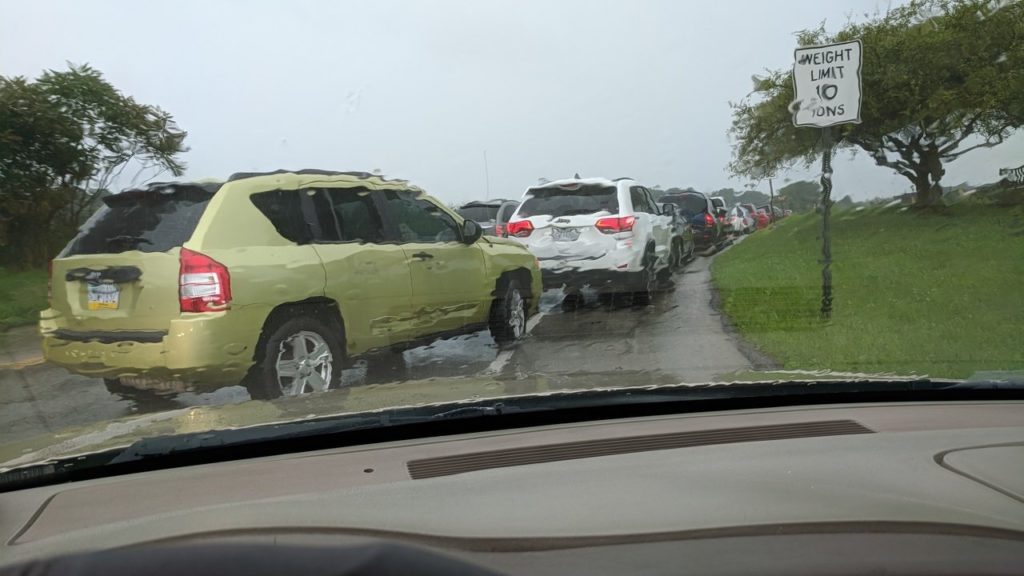 DeAngelo Williams holds the Steelers record for most carries in a game without reaching 100 yards, running the ball 32 times for 94 yards in a 2016 win over the Bengals.

“You couldn’t handle my undivided attention.”