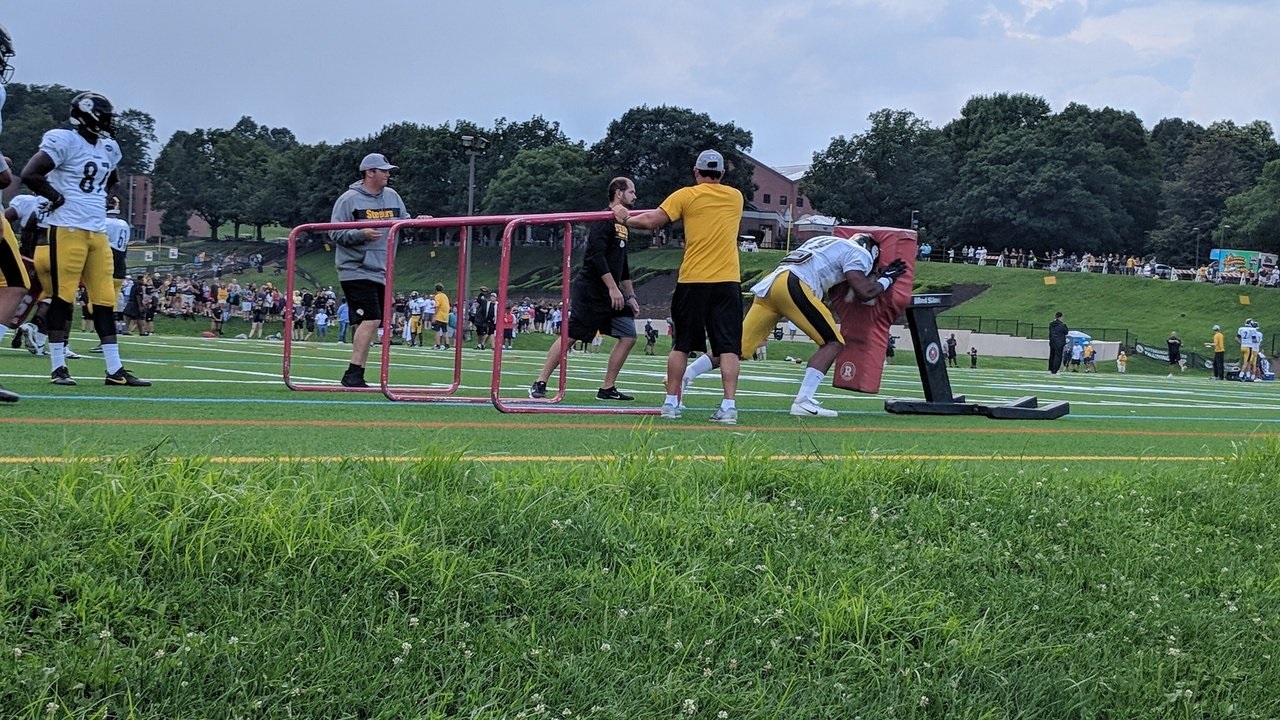 On my 45 minute drive back from camp, Creedence Clearwater Revival asked, “Have you ever seen the rain?”

What was expected to be sunny skies today turned into a downpour and severe weather. Practice was delayed to 3:15, players were chased back up the stairs partway through, and in all, a very short practice today. I guess that’s good for the players bodies. Two days not having to do much on the field. Yesterday in shells, today, players barely broke a sweat. Though the laundry room is going to look something out of a Saw movie tonight. Despite no tarp on the near field, the team still had practice on the muddy, sopping wet grass.

Let’s jump into the very little there is to talk about today.

– Injury report. A lengthy list of names, common for this time of year. Worth pointing out that most aren’t serious. Not practicing at all today included T.J. Watt (hamstring), Vance McDonald (foot). Each have missed 7 straight sessions. Brian Allen (undisclosed) and JuJu Smith-Schuster (left knee), sat out after failing to finish yesterday. No Antonio Brown (quad), Marcus Tucker (right ankle), or Joe Haden (unknown). Two starting offensive linemen, David DeCastro and Marcus Gilbert, were given the day off, per Tomlin.

How about some good news? Returning after missing time were Chukwuma Okorafor (right shoulder) and Coty Sensabaugh (back). Okorafor stepped in as the 1st team RT, though should mention Matt Feiler also ran with the 1’s, working at RG for DeCastro. So hard to say with total confidence Okorafor would be first man up at RT.

– Mason Rudolph, Chris Schleuger, and James Washington were the first players to walk down today before the rains came. They attempted to clown car into one of the golf carts when it began to pour. When that didn’t work, they sprinted to the media tent and hung out there before walking up the stairs a short time later.

– Players came down the steps at 3:15 and headed to the turf field for warmups and individual work. Good chance to be along the fence line there and get closer to the action than I normally do. Could hear Mike Munchak and Shaun Sarrett (Munchak leads players through drills, Sarrett tends to do more one-on-one work in the small breaks between drills, he went over some things with rookie center Patrick Morris). Working on punch, hand placement, then they repped combo blocks to the left and right. Double-team the first defender, once your help arrives, peel off and climb to the 2nd level.

– TE blocking sled drill happened right in front of where I was standing, as you can see in the photo above. That’s ex-rugby player Christian Scotland-Williamson, who generates movement on the sleds because of his sheer size, he’s almost like a tackle, but as I’ve written about throughout camp, needs to keep his eyes up on contact. That’s what James Daniels called out to him after this rep.

“Eyes up, you gotta see what you’re hitting!”

– No one on one work today due to the weather and all the fields being a mess. There was only a brief special teams session, working on punt coverage on the turf field, while the rest of the players just stood around. Josh Dobbs tossed some passes with Justin Hunter. So let’s jump into team sessions.

1. Seven shots but like the rest of practice, an abridged version. I had Ben Roethlisberger as the QB down in my notes but not 100% sure if that’s accurate; he didn’t practice the rest of the day. I’ll try to update that info later. The Steelers site usually has a good recap. (Edit: It Was Ben)

Either way, slot fade left corner for James Conner, who made a nice catch against Vince Williams for the score. Conner continues to impress out of the backfield, a remarkable difference from a season ago.

2. Coty Sensabaugh back full, 1st team LCB with Haden out. Slant/flat combo finds Hunter in the right flat, who turns upfield and over the goal line.

3. Quarterback looks right and then left, locating Pharoah McKever over the middle. Dashaun Phillips plays bigger than his size, reaching over the top and swatting the ball away.

1. Live, tackling session. A backyard feel in the rain and the mud. Pass complete to Justin Hunter along the left sideline. Artie Burns covering.

2. Handoff to James Conner, stuffed up the middle by a sea of defenders. Difficult to pick anyone out individually.

3. Mason Rudolph in at QB. James Conner jukes left and darts upfield. L.J. Fort and Tyler Matakevich both make the stop for a short gain.

4. Stevan Ridley gets the carry but not much working. TFL. One of the LBs came flying in, not sure who, while L.J. Fort helped clean things up.

5. Mason Rudolph at QB. Ola Adeniyi and Farrington Huguenin the OLBs. Nat Berhe and Terrell Edmunds at safety. RIdley again on the carry left side. Huguenin shed the block of the tackle and dove to wrap himself around the back’s waist. Three or four other defenders zipped in to knock Ridley down, a spare if they were bowling.

6. Rudolph playaction. Throws over the middle but high for a leaping James Washington. Incomplete. Left tackle Joseph Cheek got beat around the edge.

7. Josh Dobbs checking in. Marcus Allen, in the box, and Malik Golden, the single high safety. Fitzgerald Toussaint finds a small crease to squirm through. Looked like Keith Kelsey was in on the tackle.

8. James Summers carry up the gut. Adeniy comes from the backside to make the tackle. Coaches blow the horn, only eight plays in a typical 15 play session.

1. The team session after the players went back into the locker room and then came back out (a quick warmup on the turf field to get ready for this) around 4:45. Sensabaugh and Burns the CBs. Landry at Q. 3rd down session. Ridley pokes his way up the middle, falling out the other side for roughly a five yard gain.

3. Playaction, Jones firing over the middle complete to Tevin Jones. Sean Davis flies in to his him hard shoulder-to-shoulder but Jones keeps his stride and runs downfield.

4. Matt Feiler pulls right to left. Samuels follows behind. Matakevich and Edmunds meet him in the alley. Matakevich first, then Edmunds leaves his feet. 3-4 yard gain.

5. Pretty touch throw by Mason Rudolph, hitting Jesse James over his left shoulder on a corner route down the right sideline. Matthew Thomas had pretty good coverage but didn’t find the ball and Rudolph placed it so well I don’t it would’ve mattered.

6. Summers dives up the gut. Huguenin/Golden/Thomas all in on the stop. Summers is able to drive his feet and pick up five.

1. Goal line drill. One of the usual highlights of camp but subdued on a day like today. Conner can’t move the pile. Rugby looking scrum. Short of the end zone.

2. Short pull by Feiler off left guard. Conner follows him through and crosses the end zone, running through Jon Bostic, who brought him down, but about a yard deep. TD.

3. Jones playaction to Toussaint. Throws to left corner for Xavier Grimble, who makes a combative catch against Vince Williams. Williams claimed the ball popped out. Two officials talked it over and confirmed touchdown, perhaps an indication of the relaxed catch rules. Touchdown.

4. Jordan Dangerfield times it perfectly and knifes in to make an ankle tackle on Jaylen Samuels as he tried to tote it left side. Big loss on the play. “He’s dangerous!” Tomlin quipped.

5. Ridley runs right side. Gets spilled and Ridley tries to bounce it. Can’t win the edge, Huguenin and Matakevich taking a good angle to stop him for roughly now gain, maybe a short loss.

6. Jake Rodgers working as the tackle-eligible, sidecar to Alejandro Villanueva. UDFA RB Jarvion Franklin gets a chance but can’t cross the goal line. Fort and Golden double-up for the stop at around the 1 yard line. Defense wins 4-2 and that’s how practice ends.

– Honestly, not a whole lot to glean from only 25 plays of practice and nothing in one-on-ones.

– Mason Rudolph continues to show why the team is high on him. Back in OTAs, Ben Roethlisberger said he told Rudolph that not every throw has to be a fastball. Rudolph is showing good touch when he needs to. Throw to James against man coverage was gorgeous.

– Lot of Fort and Matakevich flying around in run sessions today. I am looking for one of the ILBs to make some plays in coverage. Only can remember Matthew Thomas making those type of plays in my notes.

Offensive linemen working on their punch in warmups. Closest to you is the rookie Okorafor. 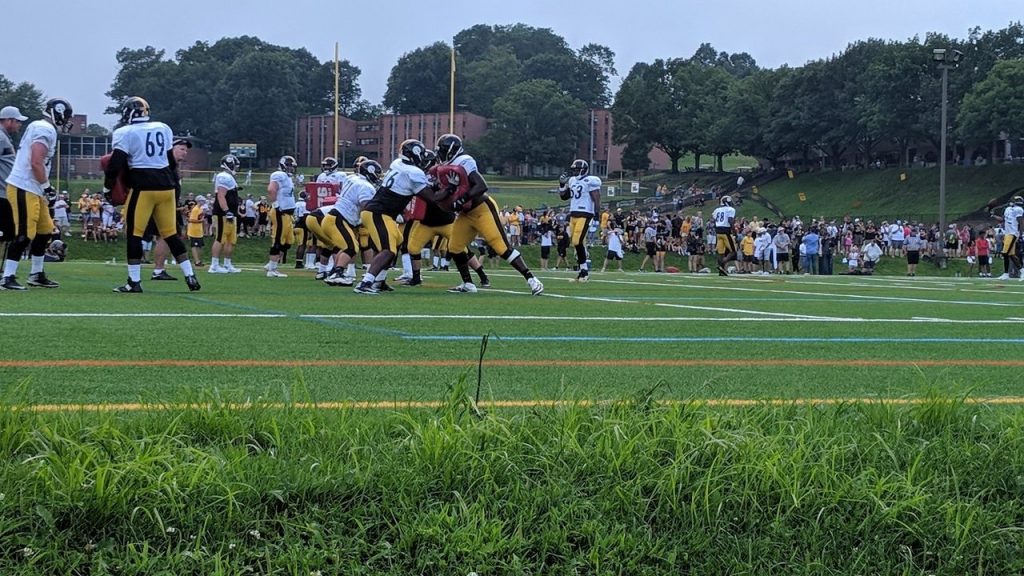 Ben Roethlisberger holds the franchise record for career fumbles with 91, edging out Franco Harris’ 90. Despite having well over 1000 career carries, Le’Veon Bell has only eight. That’s as many as Isaac Redman.

“I did not become a Lackawanna County volunteer sheriff’s deputy to make friends. And by the way, I haven’t.”