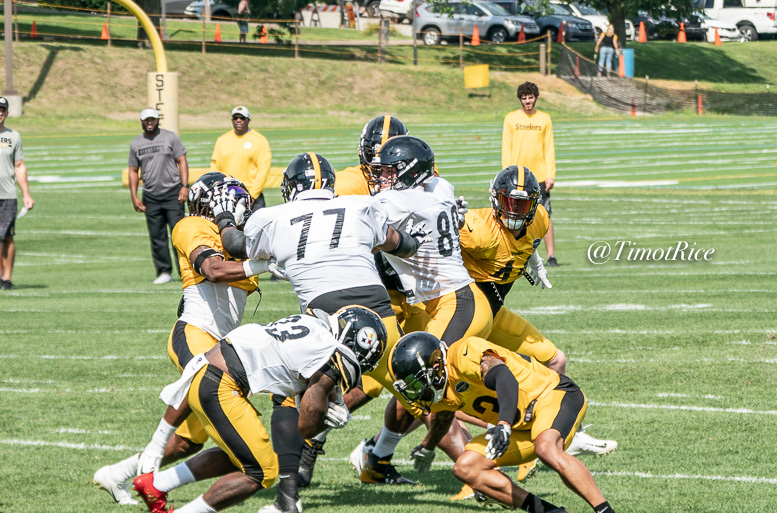 What to watch for today as the Pittsburgh Steelers return to training camp. Four more practices and then they’re done. Time flies when you’re having fun.

Today could still be intense, even if they’re 48 hours removed from the game. Checked my notes last year and the team was in pads and had a live tackle session. Each year is different, of course, but don’t be surprised if it’s a physical day.

You’re always interested in seeing how a rookie quarterback views practice after his first game, especially after someone like Mason Rudolph saw extensive time. In theory, everything slows way down and you start seeing some really excellent practices. But of course, it’s no guarantee.

Josh Dobbs had two throws that were out of his hand far too late Thursday night. One was picked, another should’ve been. Hoping that gets cleaned up and worked on, starting today.

Interesting to see who will be available. RBs take as much of a pounding as anyone else. To their credit, this group has been healthy in camp, but a lot of bumps and bruises creep up 24 hours after a game (and after taking a flight, which doesn’t help).

If there’s a time for Jarvion Franklin or James Summers to make a move, it’s now. Have to show you deserve more work than in game one. They combined for one carry, going to Summers, while Franklin saw some work at fullback. For what it’s worth, thought Franklin made a little bit of noise on special teams.

Again, I’ll credit this unit for being available. No one currently on the roster has missed a practice. But I feel like I’m running out of things to talk about with this watch-paint-dry group. That’s not to say there’s zero intrigue with this group. But it’s a raw group that hasn’t exactly progressed and I’ve attacked it from every angle I possibly can.

Similar to QB, you have some highly inexperienced players at the position in Christian Scotland-Williamson and Pharoah McKever. You hope the game starts to slow down for them to. Watch their pad level as blockers. That’s the key. CSW needs to keep his eyes up, too.

Thrilled to see Damoun Patterson have a strong performance in the opener. A guy who started red-hot in camp and then sorta faded the second week. Never know how those guys turn out in stadiums but clearly, he went in the right direction.

But plenty for this group to work on. Patterson still needs to work on some of the nuances of his route running. Ditto James Washington, who has to sell his double-moves better. Tevin Jones couldn’t run the mesh correctly to save his life Thursday. And Justin Thomas is drifting into forgotten Quadree Henderson territory…and Thomas is the backup return man.

Feel free to apply this to any position group but you also look for depth chart changes coming out of the first game. Coaches have combed through the tape and you start to see some changes here.

Thought Chukwuma Okorafor held his own in his NFL debut. His camp before Thursday had been rough. Looking for things to turn around now. Game to slow down for him and everyone else. Parker Collins reminds me of a previous linemen in camp, Chris “Chicken Nugget” Elkins. And I don’t mean that as a compliment.

Not a ton to talk about here. For what it’s worth, Joshua Frazier didn’t check into the game until very late. Battle for that 6th spot is up for grabs but I consider Daniel McCullers the front runner. Casey Sayles and Lavon Hooks, assuming the latter is still eligible, have inside tracks for a practice squad spot if the team keeps a DE there. Combine, I have the trio of Greg Gilmore, Parker Cothren, and Kendal Vickers playing only 8 snaps against Philly. Not great, Bob!

Obviously, looking to find out the status of Bud Dupree and T.J. Watt. Think there’s a puncher’s chance each are in uniform, though don’t be shocked if Dupree is held out of team work coming off that concussion.

Thought this group is coming off a good game. Positive things to say about Farrington Huguenin, Ola Adeniyi, and Keion Adams (who had a better game than I initially thought).

Exiting the game, it’ll be interesting to see who the starter is though the easy money is on Jon Bostic. How much will Matthew Thomas line up on the edge if the group gets healthy bodies back? Probably not very much but the team sure seemed interested in blitzing him Thursday (11 times total). Matt Galambos became odd man out as the team got a long look at Thomas. Not good for his chances.

Not a ton to discuss with this group. This week is probably a good one to hone in on Brian Allen and how much he’s progressed. The only question regarding the 53 is if Coty Sensabaugh makes it and it’s not like he’s an up-and-comer you need to pay special attention to.

Like I mentioned for Rudolph and the other rookies, you’re looking for the game to slow down for a guy like Terrell Edmunds. Hopeful the secondary maintains their ball-hawking ways after picking off 13 passes in camp (as a defense) and the secondary plucking two Thursday. Nice game for Malik Golden in coverage. Rooting for Marcus Allen to come on strong in these final four practices.