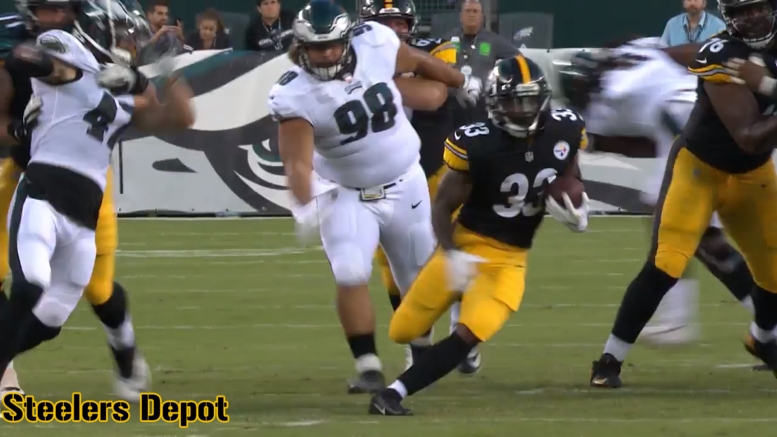 Question: Which running back, or running backs, would you keep on the 53-man roster behind Le’Veon Bell and James Conner?

While it’s long been established that Le’Veon Bell and James Conner are going to be the number one and number two running backs this season, the Steelers have at least three other running backs that are legitimately competing for perhaps only one, but possibly two roster spots.

Among them are two veterans in Fitzgerald Toussaint and Stevan Ridley. Toussaint has been around for a few years with the team already and has looked strong as a runner and pass protector, even having a moment or two on kick returns. Ridley was only brought in late last year but had a good showing in the first preseason game before sitting out the last one with a groin injury.

Then there is rookie Jaylen Samuels, who was quiet in the first preseason game but had some bright spots last week, including breaking a few tackles. The thing that I observed most, however, was his extensive participation on special teams, which should usually be taken as a sign that the team wants him to claim a roster spot.

If Samuels continues to see the sort of special teams snaps that he has going forward, then I feel obligated to pencil him in for a roster spot, assuming that the team’s plan is to give him one, even if he ends up inactive (they did the same for Jonathan Dwyer most of his rookie year). Toussaint and Ridley are still battling. I’m pretty confident this will go down to the final preseason game.