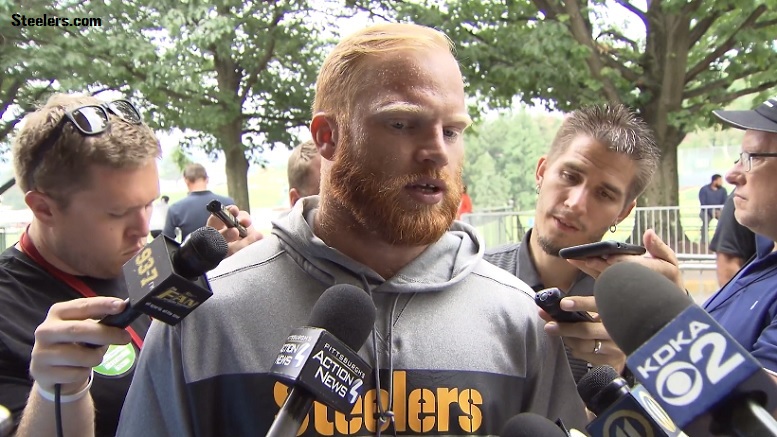 You can probably include me as one of several people who doubts that Pittsburgh Steelers inside linebacker Tyler Matakevich will ultimately be the team’s starter alongside Vince Williams come Week 1 of the regular season. While Matakevich has undoubtedly had to hear that there’s several who doubt he’ll be able to hold the starting position for the rest of training camp and the preseason the last several months, he’s really trying to block those negative thoughts out just the same.

“I mean, you can’t pay any attention to that,” Matakevich said Monday, according to 93.7 The Fan. “That’s just outside noise as I like to say. You just got to block it out. Because if you are to look at that stuff, people are gonna be doubting you your whole life. You’re always going to have the naysayers. So like I said, you just can’t pay attention to that. You just got to play your game, do your job, do your responsibility and help this team out.”

With five training camp practices now in the books, Matakevich, the Steelers former seventh-round draft pick out of Temple, has reportedly received a good bulk of the first-team reps at the mack inside linebacker position ahead of veteran Jon Bostic, who was signed via free agency earlier in the offseason. While many will say that the Steelers mack inside linebacker position is destined to be doomed in 2018 with Ryan Shazier sitting the year out with a serious spinal injury he suffered last season, Matakevich says all he can control is playing like he knows he can play.

“You only can control what you can control, you know what I mean? You’ve got to control the controllables and that’s on you,” Matakevich said. “That’s what I’m doing every day. I’m just trying to learn, get a better understanding of the game, pick these coaches brains and just ready to play fast.”

With Matakevich entering the 2018 season as one of the Steelers top special teams players, he was asked Monday if he’s willing to continue helping out in that phase of the game should he ultimately wind up being the starting mack inside linebacker.

Matakevich admitted again on Monday that the shoulder injury he suffered early last season that ultimately prevented him from taking over for Shazier after he was injured was “frustrating.” Even so, he said his shoulder is all healed up now and he’s ready to go this season.

While there were quite a few who follow the Steelers closely who believed the team would absolutely draft another inside linebacker this year, that ultimately didn’t happen. Matakevich said Monday he took that as meaning the team has confidence in his abilities.

“Oh, absolutely,” Matakevich said. “I mean, but whether they did or not, I would have the same mentality, you know what I’m saying? I mean, definitely, how everything unfolded, seeing that, I mean, it definitely gives you a little boost of confidence and knowing that they believe in you, too. So, it just allows you to go out there and just play and stop, don’t think about all that nonsense.”

You really have to hand it to Matakevich when it comes to how he’s dealing with the mostly negative background noise associated with him potentially being the team’s starter come Week 1. When the Steelers release their first official depth chart of 2018 next week, it won’t be surprising to see Matakevich listed ahead of Bostic. Additionally, I would expect Matakevich to start alongside Williams in the Steelers preseason opener against the Philadelphia Eagles.

There is, however, a lot of training camp practices and four preseason games remaining before the Steelers coaches have to make their final decision as to whether or not Matakevich will start over Bostic. In the meantime, however, expect ‘Dirty Red’ to continue to go about his business pretty much in the same manner he has since he was drafted and that business will resume on Wednesday when the Steelers resume their 2018 training camp practices after having Tuesday off.

“This is a great time, this is a culture-building time,” Matakevich said. “This is when you come in and really set a foundation for what we’re going to expect for the season. So, right now this time is crucial, just being able to get those reps and just not only mentally, but physically out there.”