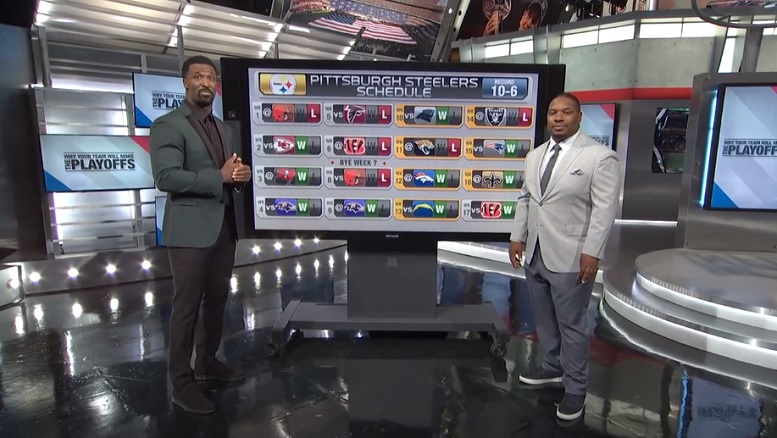 We’ve now reached the point of the offseason when major media types are beginning to predict the 2018 win-loss records for every NFL team by going game-by-game through the schedules. On Monday, former NFL players James Jones and Maurice Jones-Drew attempted to predict the outcome of the Pittsburgh Steelers 2018 regular season schedule and after a little bit of dickering on a few games, they have them going 10-6.

Jones started the segment off by predicting the Steelers first eight regular season games of 2018 and he has them going 4-4. Within those eight games he has the Steelers losing both of their games to the Cleveland Browns in addition to them losing their Week 5 home game to the Atlanta Falcons as well as their Week 6 road game to the Cincinatti Bengals.

Jones, however, has the Steelers beating the Baltimore Ravens twice as well as the Kansas City Chiefs and Tampa Bay Buccaneers in Weeks 2 and 3, respectively.

Jones-Drew took the back-half of the Steelers schedule and has them going 6-2 in their final 8 regular season games. The former NFL running back has the Steelers losing their road games against the Jacksonville Jaguars and Oakland Raiders. Surprisingly, he has the Steelers beating the New England Patriots at home in Week 15.

Several online betting establishments currently have the Steelers win total over/under number set at 10.5 so it’s obvious that Jones and Jones-Drew believe the under is in play for Pittsburgh in 2018.

How many wins for the @Steelers in 2018? ????@MJD and @89JonesNTAF predict every Steelers regular season game! (via @NFLTotalAccess) pic.twitter.com/Kbf3DYZqjS