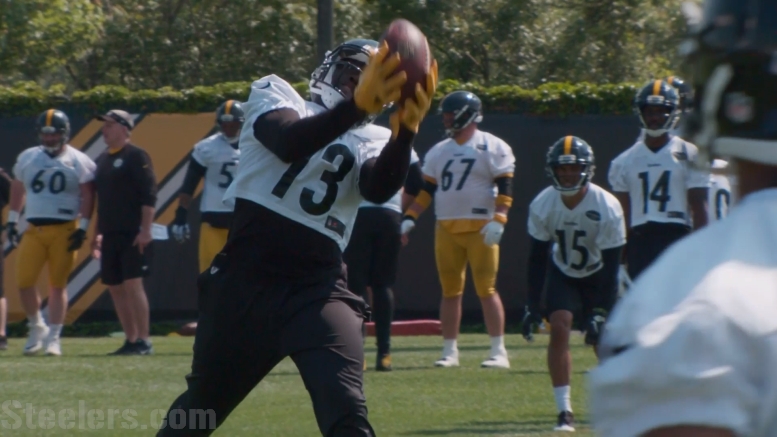 Earlier this week, I wrote about what Pittsburgh Steelers quarterback Joshua Dobbs had to say recently about rookie wide receiver James Washington after working with year’s second-round draft pick throughout the offseason. This past weekend, however, while attending the annual Hampton Roads Youth Foundation event in Virginia, Steelers head coach Mike Tomlin was also asked to give his thoughts on Washington and his rookie season prospects during a short interview on the Roto Experts podcast, On Target Fantasy Football.

Tomlin was asked if he thinks Washington can push second-year wide receiver JuJu Smith-Schuster in 2018 and what his overall thoughts are on the Oklahoma State product with the team’s annual training camp in Latrobe about to get underway.

“Man, I’m equally as excited about James as I was about JuJu,” Tomlin said. “His talent level is there, his conditioning is there, his football intellect is there. I see no reason why he can’t have a similar impact. Obviously, there is a division of labor and we kind of got to sort out who does what, but I’m not going to be surprised when he’s a contributor to our efforts and probably in a similar way that I wasn’t surprised when JuJu was a significant contributor a year ago.”

This marks at least the second time that Tomlin has praised the conditioning level of Washington this offseason as he also did so after the team’s mandatory minicamp wrapped up last month. Now the true test for Washington will be staying healthy throughout training camp and the preseason, which is something Smith-Schuster failed to do last year.

Whiler Smith-Schuster did miss some valuable practice time and preseason game action last year, he still was able to get himself on the field immediately during the regular season and ultimately was a huge contributor on offense the rest of the way. It’s easy to speculate that Washington will be able to do the same during his rookie season as the team’s No. 3 wide receiver and Martavis Bryant replacement.