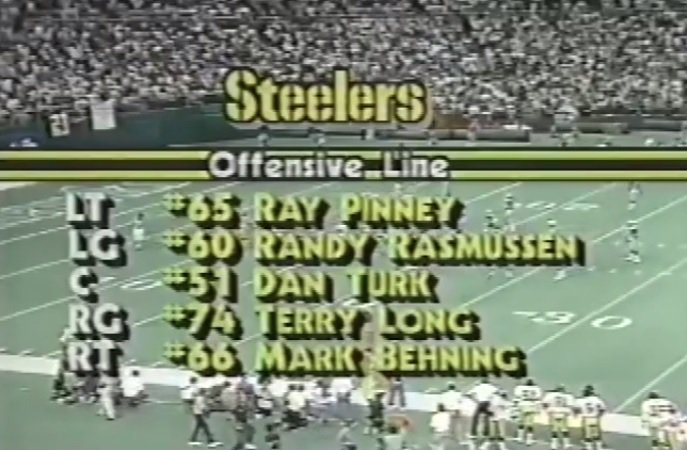 In the Pittsburgh Steelers Week 1 game of the 1986 regular season against the Seattle Seahawks, two quite notable things happened.

First, veteran center Mike Webster had his streak of 150 consecutive games started come to an end because of a dislocated elbow that he had suffered during the preseason. If that weren’t enough, the Steelers were forced to let three offensive lineman make their first career starts against the Seahawks because of injuries to other players.

With Webster out, Dan Turk, who was selected by the Steelers in the fourth-round of the 1985 NFL Draft out of Wisconsin, was forced to make his first start career start at center against the Seahawks. Additionally the Steelers were forced to let Randy Rasmussen and Mark Behning make their first career starts at left guard ad right tackle, respectively, due to knee injuries suffered during the summer by starters Tunch Ilkin and Craig Wolfley. To make matters even worse, John Rienstra the Steelers first-round selection in 1986, had to miss the regular season opener because of a bleeding ulcer. Had he been healthy, he would have likely started at left guard. Oh, and now is probably a good time to tell you that tight end Preston Gothard also made his first career start that Sunday against the Seahawks.

Of Turk, Rasmussen and Behning, the former probably was saddled with the toughest matchup in his first game as a professional offensive lineman included him going up against Seahawks defensive end Jacob Green, who had recorded 42.5 total sacks the three previous seasons.

While Steelers quarterback Mark Malone was only sacked once in what ultimately would be a 30-0 loss to the Seahawks, that was more of a byproduct of him trying to get the football out quicker. While Turk said after the game that it was his belief that he and Rasmussen represented themselves fine as pass protectors in their first career starts, Steelers head coach Chuck Noll thought differently.

“It was not much of a supporting cast,” said Noll, who mostly blamed Malone’s poor showing against the Seahawks on the pass rush, according to the Pittsburgh Post-Gazette. “Sometimes that happens when people are in your face and on your legs.”

Prior to him being replaced by backup quarterback backup quarterback Scott Campbell very late in the game, Malone had completed just 9 of his 27 total attempts for 79 yards and 3 interceptions. 4 of those passes were caught for 41 yards by wide receiver John Stallworth. The other five passes that Malone completed went to running backs and Campbell failed to complete either of his two pass attempts during the Steelers final offensive possession of the game.

The Steelers running game also struggled mightily against the Seahawks with three inexperienced offensive linemen making their first career starts. In total, the Steelers rushed for 85 yards on 30 total carries with a long run of 10 yards by running back Frank Pollard on the second offensive play of the game. Wide receiver Louis Lipps had the second-longest run of the game for the Steelers and that was good for 8 yards via a flanker reverse.

While Ilkin and Rienstra returned to action in Week 2 to join fellow starters Ray Pinney and Terry Long on the offensive line, Turk had to start the next three games in place of Webster, who finally returned from his injury in Week 5. Turk was ultimately traded to the Tampa Bay Buccaneers in April of 1987. Rasmussen started a total of three games that season and was ultimately waived prior to the start of the 1987 season. As for Behning, he never started another game as not only did he fail to impress the remainder of the 1986 season, he missed the entire 1987 season with an injured Achilles. The Steelers ultimately parted ways with Behning just ahead of the 1988 regular season getting underway.

The Steelers went 1-3 in those first four games of 1986 without Webster and ultimately ended the season with a 6-10 record. It marked just the first time since his first season in Pittsburgh that Noll had a team register double-digit losses during a regular season.

If you dare, you can watch that Steelers 1986 Week 1 loss to the Seahawks below: