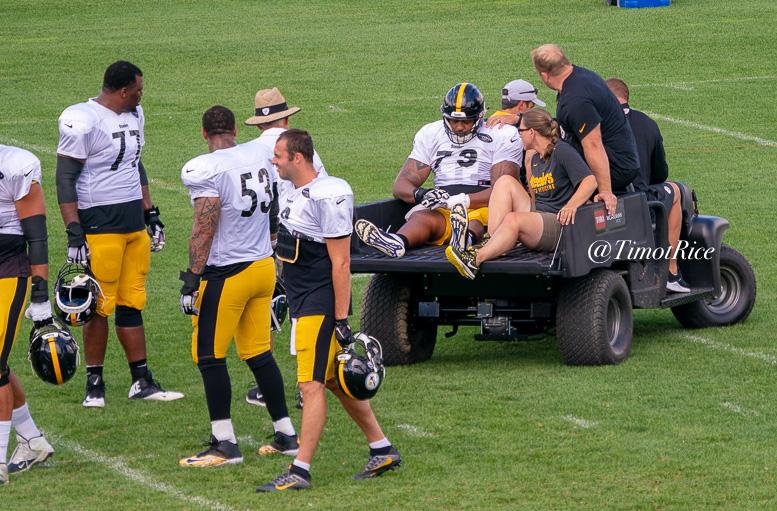 Only in the NFL do millions of fans, as well as coaches and teammates, breathe a singular sigh of relief when they learn that a player suffered a hyperextended knee in training camp.  But that is exactly what happened this morning when NFL reporter Aditi Kinkhabwala shared the good news on Pittsburgh Steelers guard Ramon Foster:

Huge sigh of relief from #Steelers camp. LG Ramon Foster hyperextended his knee, but did not suffer any ligament damage and will NOT need surgery. Should be out 4-5 weeks.
Remember: no Steeler has logged more snaps since 2009 than him.

It could have been so much worse, obviously.  Since it was a training camp practice, there is no film to review.  But thanks to Tim Rice, who has been at Latrobe taking fantastic photos (shameless plug, you should follow him on twitter @timotrice), it was clear that Foster was being supported on both sides and not putting any weight on the injured leg as he was helped onto the cart that took him to the locker room.  That is typically not a good sign, but it could have been cautionary.

Ben helping Foster and rides out on cart with him. Not good. @Steelersdepot #SteelersCamp #steelers. pic.twitter.com/bXEA8VebHR

We also learned from Aditi that there is no ligament damage to the offensive lineman’s knee but that he has a bone bruise.  She went so far as to give a time estimate on his return:

#Steelers LG Ramon Foster also has some bone bruising. But his (and the team’s) goal is still that he returns in time for Game 1.

Based on this, I assume that Foster returned to Pittsburgh yesterday and already underwent an MRI of his knee, which revealed that the knee ligaments are intact – and there is no need to emphasize how crucial (no pun intended) this is for his season.

So, what is a bone bruise you ask?  As a matter of fact, the Steelers left guard is not the first on this team to suffer that injury in recent years.  I wrote about it in 2014 when running back Le’Veon Bell sustained the same injury after a scary hit to his knee in the season finale against the Cincinatti Bengals.

Here is a quick rundown again (courtesy of www.md-health.com): 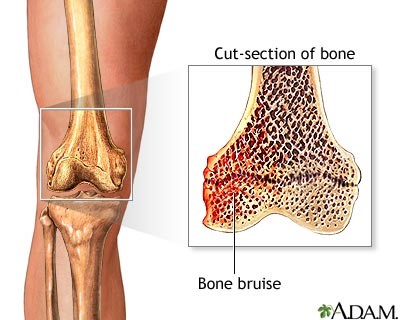 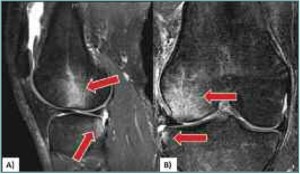 For now, Foster’s treatment plan will likely be RICE (rest, ice, compression, and elevation).  As his swelling and pain decrease, his initial therapy will focus on keeping the joint loose, most likely with a stationary bike.  As he continues to gain mobility, he can work on strengthening exercises.

Typical recovery time for an isolated bone bruise (i.e., no ligament damage) is 4-8 weeks.  And where NFL players are concerned, it certainly seems to be situational as well.  We all know that Bell missed the Wildcard round playoff game the week after his injury.  And I hate to bring up painful memories, but the Steelers lost to the Baltimore Ravens, so the season ended.  Bell said that he could have played the following week had the Steelers advanced to the Divisional round, and that’s probably true, although he would not have been 100%.  He skipped the Pro Bowl a full 5 weeks after injury, but that probably doesn’t have much to do with how his recovery was going.  When JuJu Smith-Schuster sustained a bone bruise in his rookie preseason, he only missed one game, returning for the third preseason matchup, and he never skipped a beat.

Skill position players clearly have different physical demands than linemen, and the same injury may require a different recovery time based on position.  In the 2012 season, Seahawks tacklle Russell Okung suffered a bone bruise in his left knee and missed one game.  Quinton Spain, left guard for the Tennessee Titans, was carted off the field with a bone bruise to his right knee and missed 4 weeks…returning to a 40-17 loss to Pittsburgh at Heinz Field.  That was a fun game, with Ben Roethlisberger throwing 4 TDs and the Steelers defense catching 4 passes from Marcus Mariota.  But I’m getting off track here.

The bottom line regarding recovery is that Foster will be week-to-week, depending on swelling, pain and range of motion.  Fortunately, Ramon Foster is a veteran and has complete familiarity with the Steelers offense and his quarterback.  Given that, it is not nearly as challenging for Foster to miss training camp reps and slide into position later.  If this were later in the season with playoffs on the line, he might miss less playing time.  But at this point, it makes sense to allow him time to fully recover and start the season as healthy as possible.

Ironically, the left guard, who has been so reliable over the years, will almost surely miss all of training camp, which he has described as necessary torture.  You only have to look at his twitter page to understand how he feels:

“I hated every minute of training, but I said “suffer now and live the rest of your life as a champion.”

There is no question about Foster’s deep commitment to this team and his teammates, especially his quarterback and fellow linemen.  I would guess we will see Ramon back on the sidelines within a week.  And if he is walking without crutches, I have no doubt he will be ready for Week 1 of the regular season to face the Cleveland Browns.