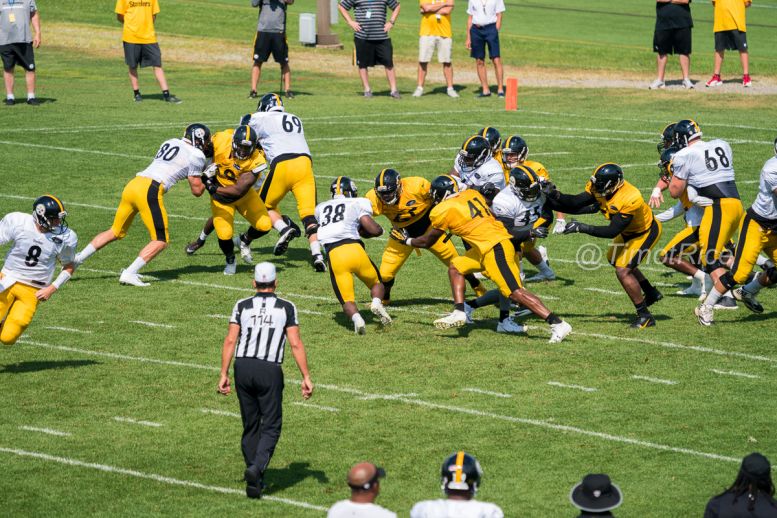 Today is the best day of the year. The start of the Pittsburgh Steelers training camp. Forget about all the speculation, the offseason fodder, the “I’m in the best shape of my life” puff pieces. Now, it’s only football. Life is good.

Here’s what I’m looking for on Day One of practice.

– To preface, we do need to keep some perspective in all our excitement. It’s one day, they still are in shorts and shells, and this is a long process. It isn’t about having just one impressive practice. It’s about showing consistency in those good days, carrying it over until the next, and fixing the ugly ones, not stacking bad days/bad plays. As much as we’re dying to know “who’s looking good,” and hey, I’m the first in line for that, we can’t overreact to it all. It’s about the body of work, not one play, not one practice. Something important to keep in mind.

– Ben Roethlisberger and Landry Jones will be the #1 and #2. Who is third string Thursday? Mason Rudolph is the heir but he’s still a rookie. Can Josh Dobbs get the early nod? Pecking order aside, Rudolph has to crawl before he runs. Master the details. Show movement within the pocket, get the ball out quickly, know where your checkdown is, make a profit on each snap, no turnovers, no bad center or running back exchanges. Dobbs needs to show better and more consistent accuracy, especially on the short to intermediate routes.

– Big time for James Conner. He’s apparently lost some weight in the offseason so you’re looking for better burst in the hole. Those regular season reps should’ve improved his ability to process and read the defense too, especially on zone runs where the backs cut is based on how the defense plays it. You’re looking for him to play faster. He’ll never be mistaken for Le’Veon Bell but pass protection and hands out of the backfield will be critical components too. It will be tough to see his protection chops tomorrow because they’re in shorts but the hands, you can get a better evaluation of.

Where will Jaylen Samuels line up? I am assuming you’re going to see him at RB and WR. I’m going to try and chart all that – we’ll see how well I can juggle that with everything else. As a receiver, you’re not going to see a ton of separation from him because he’s a bigger guy but he has to be capable of boxing out linebackers and making tough catches over the middle. Be quick to the tuck and strong after the catch.

How much work will Stevan Ridley and Fitzgerald Toussaint get as kick returners? Ridley is an interesting option there and I hope he gets a shot at it. If he’s not fielding them in practice, he won’t do it in-game either. And where do they fall in the rep order? Samuels has promise but Ridley and Toussaint are the vets. Can 7th string RB James Summers throw a pass? He was a QB at a JUCO before transferring to ECU (and threw some passes there, too).

Will there be a 2nd fullback behind Roosevelt Nix? Or will someone like tight end Ryan Malleck be used in that de-facto role, like David Johnson was.

– I don’t think James Washington will immediately get lumped in with the 1’s in three receiver sets. My bet is Justin Hunter gets the initial nod because, even if I’m not crazy about him, the team likes him. If there’s a time that Hunter will ball out, it’s going to be these first two days, sorta similar to what took place last year (though those practice reports were overblown). Washington gets the chance to build some chemistry with Roethlisberger. Can’t wait for the first deep shot and see what the result is.

Marcus Tucker’s clock starts ticking now. Eli Rogers returning dings his chances but until Rogers is activated off PUP, it won’t eat into Tucker’s reps. Let’s see where Quadree Henderson lines up, how creative they get with him, and if any of the others can make some plays: Trey Griffey, Tevin Jones, Damoun Patterson. Justin Thomas should get a look as a returner, too. His toughness playing QB in a triple option offense should carry over as a KR/PR.

– It’s also going to be interesting to see what new drills Darryl Drake, and by that token, Randy Fichtner, incorporates into practices. That’s where you can expect to see some variation, something we haven’t had in awhile in Pittsburgh.

– Let’s all board the Vance McDonald hype train. Staying healthy is key but I’m excited to watch him work in his first training camp as a Steeler. Jesse James had trouble with combative catches in camp last year, partly why they brought McDonald in, but he seemed to correct that in the regular season.

Xavier Grimble needs to make sure the heat doesn’t get to him, it will be relatively mild tomorrow with the highs in the low 80s. Grimble has missed at least one practice the last two seasons because of it. Has to be available, has to be able to finish every practice. The talent is there.

Pharoah McKever is going to have a fun time with the blocking sleds. His height is going to hurt his leverage. Most guys correct it by the end of camp. Ditto Christian Scotland-Williamson, the freaky former rugby player from the UK, who is coming in at a whopping 6’9. That’s a guy you start from the ground up, right down to his three-point stance. Bad stance equals bad results.

– Not much to talk about with the starters. Curious to see the pecking order on the second team. Is B.J. Finney the backup center or will they start him off at guard (he’ll play both, of course). Who else has the early nod? Patrick Morris is a favorite of mine.

I figured Bryce Harris was going to run as the 2nd team right tackle but after failing his conditioning test…I don’t know what changes now. Would be big for Jake Rodgers to get a leg up and run with that unit. HUGE difference in reps between 2nd and 3rd team.

If all 16 linemen are practicing tomorrow, and it seems like they are, there’s going to be an odd man out. Only 15 spots (three teams of five). That means someone is left holding the bag and at best, getting rotated in. That lack of reps is the wrong start for anyone trying to impress. Who will it be? Couldn’t tell you. Joseph Cheek? Larson Graham? We’ll soon find out.

– Isn’t a whole lot that has to be said with the top five. But beyond that, there’s tons of battles going on. Who is 2nd team nose tackle? Daniel McCullers? How quick is Joshua Frazier’s first step? He’s gotta be able to two-gap and anchor versus the run, minimum. What backups get moved around and play multiple spots? That’s key to increasing value.

It’s a very crowded group with 12 DL on the roster. Someone is getting the short end of the stick. Casey Sayles, Parker Cothren, and those in a similar position better come out swinging.

Even though John Mitchell isn’t the DL coach, a very weird thought, Karl Dunbar still demands his guys run to the football. Great hand use is also critical, being able to close space with your blocker in the run game, find the ball, and disengage with a two-hand swipe.

– It’s going to be hard to get too excited over Bud Dupree having a good camp, he’s a veteran at this point, but it sure would be a nice start. Is the LOLB/ROLB flip exclusive? Or is there still a back-and-forth (which I’d prefer)?

Anthony Chickillo should have a nice camp like usual, winning with a varied repertoire. Can Keion Adams have one too? He showed a quick first step last year but no longer a rookie, the expectations are higher. Hoping Farrington Huguenin can hit the ground running. Ola Adeniyi’s lack of height is going to give him a leverage advantage and the ability to dip and rip the edge against taller tackles.

– All eyes will be on Tyler Matakevich vs Jon Bostic, the biggest camp battle there is. I expect Matakevich to get the initial first-team rep and go from there. Matthew Thomas’ name has been circled by several, including us here, has to show consistency with his mental processing to read his keys and be strong on his run fits.

Keith Kelsey vs Matt Galambos is another battle to watch out for. Those two competed last year. Galambos initially won out but after getting hurt during the season, landed on IR and Kelsey replaced him.

– Cam Sutton could play, well, everywhere. I think the bulk of the time will come 2nd-team slot. Artie Burns was the only guy who could slow down Antonio Brown last year. Then again, Joe Haden wasn’t in camp either. Should get some really fun 1v1s.

Brian Allen is poised to take a big step, maybe even more than a typical 2nd year player because of how raw he was as a rookie. I want him to show the potential to be a starting corner in 2019. Seriously bummed out Trey Johnson’s season is over before it even started. But his loss is the gain of the likes of Jamar Summers, a try-hard corner who might be better off at FS. He could pick off a few passes in camp.

– Man, I could dedicate a whole post to just this group. It’s truly a clean slate. Is Sean Davis the FS? Does Terrell Edmunds come in right away in dime or will he have to earn that role? How do the pieces move around in dime? Morgan Burnett to the box? Jordan Dangerfield and Nat Berhe offer some strong depth. Once the pads come on, those two – plus Marcus Allen – are going to do some serious hitting.