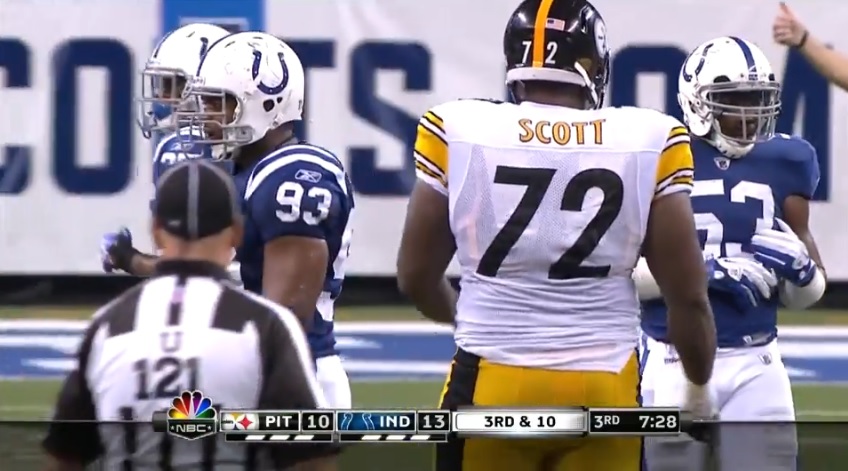 Most of this series has celebrated great moments in team history. Major playoff moments, iconic, athletic plays, feats that will be etched in the minds of fans forever.

This? This is not one of those times.

But hey, even Yinzer Nation can use a gut-check sometimes.

It’s 2011, which yeah, wasn’t a decade ago like the criteria for these articles but it’s felt like an eon since the Steelers had problems along their offensive line. Bravely, or more accurately, stupidly, Pittsburgh waltzed into 2011 with Jonathan Scott as their starting left tackle, cutting Max Starks before training camp because of his inflated weight and the team’s equally large payroll.

A 2-2 start made them reconsider. Ben Roethlisberger was getting the snot beaten out of him, sacked 14 times over the first month and rag-dolled around countless more.

Defining that stretch was one play against the Indianapolis Colts in Week 3, a primetime Sunday night matchup. Scott had already given up a sack/forced fumble/touchdown to Freeney earlier in the game. But that still didn’t look as ugly as this play.

Freeney faked a hard outside rush, the move that beat Scott for the scoop and score already. As Scott cheated outside to defend it, Freeney spun back inside, grabbing Scott’s outside hand to knock down his punch, and immediately won inside.

I have no idea if this next move was planned or pure instinct, like a person playing dead in front of a pissed off bear. In a desperate attempt to stop Freeney, Scott turned around with him, a literal butt block, an offensive tackle now staring back at his quarterback. Fear, I assume, in both of their eyes.

The move worked, technically speaking at least. Scott got in the way, Freeney countering with a hard shove, pushing him into Roethlisberger and sending the quarterback stumbling to his right. Roethlisberger managed to recover and heaved a throw far down the right sideline for Mike Wallace. It had no chance of being completed, though a better outcome than a sack.

2011 was Scott’s last year as a Steeler and he’d make only one more start at tackle after Week Four, Starks stepping right in despite three days of practice for a guy with a bad neck and was considered far too fat just two months ago.

From there, things got a whole lot better. Maurkice Pouncey and Marcus Gilbert, already drafted, became studs. The team added David DeCastro, Ramon Foster ascended up the ladder, they found a gem in Kelvin Beachum, and ditto with Alejandro Villanueva.

Today, they have arguably a top five offensive line. Hold onto those five tight. Because the butt block will live forever in my nightmares.